Musing on an archetypal White Godhead

The major metaphor that I have discovered as regulating my personal preferences in theology is the prism.

Light is itself invisible to human eye, although it is that by which we see at all. When it strikes a prism, the spectrum of visible hue --and its invisible extremes of ultra and infra-- appears. That is how I basically see God and the creation: a single energy beyond our sense and mind and which must express itself in a multiplicity of forms in order to communicate with us.

The Godhead is revealed to us in three "books," the Book of Nature, the Book of History and the Book of the Soul.  Although not isomorphically, these three correspond to the ancestral, prophetic and sapiental paths.

(The rainbow and the LGBT rainbow flag are, of course, entirely and unfortunately coincidental.)

Henotheism is an appealing alternative to strict monotheism and to Fate-dominated polytheism. And modalism, the old Trinitarian heresy, also appeals as an explanatory theory: the One Godhead, not knowable in itself, is revealed/expressed in a variety of images and modes within a finite and multiple creation. Trinitarianism, while rightly at the heart of orthodox Christianity, distracts from the focal points of what I am imagining. The choice between mono and poly is one I do not think --today, anyway!-- we have to make.

This allows for a more frankly mythical language in religion that does not rely so much on a particular set of historical events as directly managed by God (although it cannot be, for Westerners, a mere set of allegories).

My Christian background remains strong. The deity I sketchily imagine is expressed as a Triad of male divinities, but each with a feminine "helpmate".  The Triad corresponds to the three great streams of human religion: ancestral, prophetic and sapiential.

There is a Father-God, the Patriarch Creator and his spouse, who carries the Mother.
They generate Twin Sons, a Warrior Prophet and a Sage. (The Father, Son and Spirit background is quite clear, no?) And very likely these two God-Brothers are provided with feminine companions --how and in what realm I am not sure-- a Virgin Sister for the Warrior and a Hetaira for the Sage.

The Father's symbols are the rod/staff and the bull, the Prophet's are the sword and the lion, and the Sage's are the pen and the eagle. The connection of the FatherGod's bull with Europa is not incidental...in fact, that is the name I would give to his GoddessWife: Europa, the Mother of the Sons of the West. 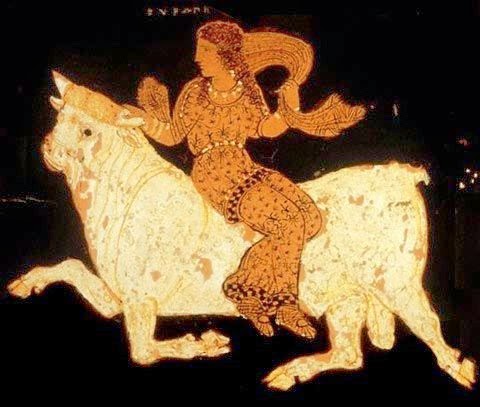 Although not taking the ancient Apostolic Christian doctrine of theosis/divinization in a concrete and polytheist frame like the Mormons, I would make the incarnation of this Godhead in the members of the Sons of Europa as the fundamental trajectory of the faith. Not simply declaring that Whites are gods --all too obviously and embarassingly untrue!-- but that some kind of mutual sharing of life, the uncreated and the created, has a lot to do with the reason for creation in the first place.

You Bible scholars might notice the bull, lion and eagle of Ezekiel, Revelation and the evangelists; the fourth symbol, the human face, is for the Kinsmen...the religious name I have given to the Sons of Europa.

And so Jung's strictures on a Threefold divinity would be answered by making the Sons of Europa and their women and families the Fourth Realm.

My anthropology forbids any kind of pollyanna view of people as originally pure and innocent. That is a mythological theme, not a description of empirical man. Homo sapiens, as a race created by descent from earlier primates, never new an actual historical moment where a deathless and perfect Garden-world existed. We have always been required to engage in competition and violence in order to live and so these things cannot be inherently wrong. But we are in the equally real position of having consciousness and conscience along with the rest, so while we are not, in the Christian sense, "fallen," we may as well be! We are complex and flawed species who is yet --at least in part-- ordered toward, in St Peter's words, participation in the Divine Nature.

My career as heretic continues apace.

I do not quite know about pairing her with the sage (though I get your symbolism there) it is about god damn time the Courtesan, never again the prostitute as high as she is now, took her rightful place as the premier of women in the workforce and men's spaces.

Are those four images the Four Living Creatures? They remind me of the Wathcers/Guardians of the Watchtowers.

Under this scheme, would certain gods be identified as cultural identifications of the Godhead and their female helpmates? Some Greco-Roman parallels spring to mind: Zeus/Hera for the Father and Mother (Bulls were sacrificed to Zeus, even), Ares/Athena for the Warrior and Sister (both were war deities, and one of Athena's epithets was "Parthenos," virgin). The Sage and the Hetaira are less clear, since wisdom is covered by Athena already; perhaps Hephaestus/Aphrodite? As goddess of love and sexuality, she certainly fits.

Other cultures feature way more overlap. Odin, for example, is a mixture of Father, Warrior, and Sage in one. Freya, queen of the valkyries and fertility, could be either the Sister and the Hetaira.

I was unaware of the existence of the Hetairai. Kind of blows up the whole "women have never been independent before this moment in history" thing the feminists have going.