What the sons of Europa need is a religion that is as tribal and survivalist as Judaism, as masculine, terrestrial and tough as Islam and as intellectually and aesthetically creative as Christianity...with a dose of the unflinching realism of the ancestral ways of the Greeks and Romans, Germans and Celts. 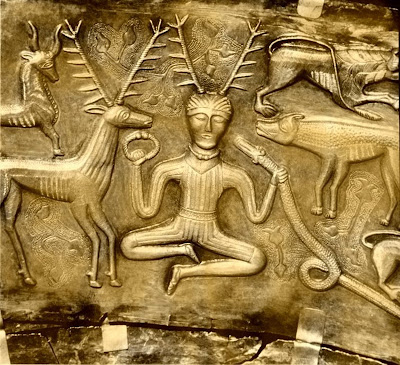 And for the larger Indo-European frame, something of the Indian capacity to combine an ultimate and philosophical realization of The One with a robustly mytho-poetic religion on-the-ground. Oh, and some of the psychological acumen of Buddhism.

Should be easy to imagine, no?

On the role of the feminine and of human females: All world religions are the creations of men for men. Women follow these religions because they follow their men. There are certain aspects of female life that would be well served, I think, by a female-only secondary priesthood, one whose activity was limited to other women (like the Relief Society in LDS) and to their concerns.

I was thinking especially in sacramental terms of female initiation rites on coming into puberty, around childbirth and on rites of healing. There is no compelling reason why the female mysteries should not be recognized and solemnized among women by woman.

The connections of the feminine consorts with the Thrice-Male (a nice Gnostic term) are in play for me. Given my minority experience, I claim no expertise. The Warrior Prophet and the Wise Lord might switch? The hetaira with the Prophet and the virgin sister with the Sage? Hmmmm. Seems a bit too congruent. But if there is one thing about the feminine that strikes me, it's fluidity.

If my theology of God and gods remains more or less as is, these three great modes of divinity --Ancestor, Prophet and Sage-- will both reflect and attract all sorts of images, themes, narratives from the various religious imaginings of the race's archetypal history. All sorts of kinship should emerge and shift. Echoes, resonances, etc. Mythic boundaries are often fluid. 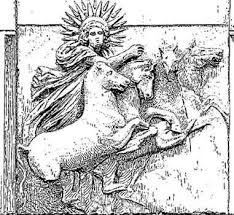 The realm of darkness, to shift focus, need not always be demonic, as it tends to be in Christianity. I would distinguish between the demonic --supranatural powers which hate mankind and even the creation itself-- and Shadowgods, divine powers of the necessary shadows cast by light in the world, or of the Underworld, of death, of chance, of disorder and destruction...which play a necessary role in the world's unfolding.

All this, of course, as with the whole "project", is a kind of play. And as serious as play always is.

Regarding female rites, I think a ritual surrounding menstruation would be appropriate. The girl would enter the temple wearing a white dress and carrying a lily. The priestess (Mother?) would welcome the girl into the sisterhood of women. The girl would receive a pink shawl/veil to represent that she is now sexually mature, but still a virgin. The priestess would take the lily, throw it onto a fire, and present the girl with a pink flower. She would instruct the girl that the flower represented her newfound sexuality, and admonish her that many men will desire her, and that she should be on guard against those who would dishonor her. Consecration with oil would seal the girl as a newly acknowledged woman. An invocation to the goddesses to watch over the newly anointed young woman and a procession out of the temple would conclude the ritual.

What role do you think color should play? Should it be liturgically based, with certain colors corresponding to certain times of year, or worshippers dressing in certain colors in the temple to indicate their life stage?

Would there be a singular priesthood for the gods, or would there be religious orders devoted to a specific god? Would the same hold true for the women?

Far too detailed for what I am musing on, Sean.

I don't know why I am posting it here but, whatcha think of this article at Unz?

Southern Italians belong to J2, which is the Mesopotamian Y-group, related to J1, the Semitic Y-group. Northern Italians are R1b, which is Europeans (and, interestingly enough, Chadics, Turkmens, Armenians, and Bashkirs). Eastern Europeans are R1a, which also includes south-central Turkic peoples and the Indo-Iranians of north-central India. These are, of course, true of pre-colonial and migration populations.

So what do we make of the fact that Western Europeans share a Y-group with Africans, and not even northern Africans?

Genetics is one part of the creation of race, but not the whole story. In the contemporary world, White has a quite specific meaning.

The Whites who are under threat by the Others are clearly understood by the Others
to be the Caucasian peoples who constitute(d) European Christendom: Orthodox, Catholic and Protestant (regardless of current day affiliation or belief).

I would include the Georgians and Armenians by extension, being Caucasian Christian peoples on the borders of Christendom against Islam.


The other Caucasians, the AfroAsians of North Africa, the Middle East and Aryan India are
not White. This includes the Romani, the Balkan Muslims, the Jews and Arabs,
the Turkic and Iranic peoples and the Aryan North Indians/Pakistanis.

Ashkenazi Jews are Whites by long association but since their homeland is clearly in western Asia, they are not really Europeans but are Asian Caucasians of mixed Western culture. I realize that this is a distinction which may be lost, say, on a group of angry Ebonics, but the Ashkenazi self-understanding cannot escape from its inherent anxiety at never quite belonging and always seeing themselves as outsiders with a precarious history --hence the obsession with "anti-semitism", the fear of (non-Israeli) nationalism and the general resentment of Christianity. Hillaire Belloc described the problem painfully well back in the 20's.

If, and only if, you're unmixedly descended from European Christians, --the people that bear the blame for the rest of the world's problems--you're White.

I also read somewhere that all Europeans and Russians share such common ancestry with the genetic group that lead to the creation of AmerIndians that even in the Old World there is about 12% genetic correlation. I got into a heated argument with a liberal who was insisting that this meant White people were Native American. I agreed for the semantic reasons of America being named after the Italian explorer Amerigo Vespucci and being an Anglo founded nation based of the Blackstone Equation but he INSISTED that no, we are genetically the same as Native Americans. To which I responded that then, they have no right to complain about our taking of their land, no right to complain about all of those sportsball teams with "demeaning names" and that they are equally accountable for the enslaving of black people. He never came back to that blog again.

Dear me, that definition may put me out of the running, seeing as my grandmother has a maiden name that means "son of David," and that's about as Jewish as you can get. We don't know how far back the descent goes- possibly some Russian Jews who converted- but there's certainly no cultural affinity nowadays. Still, that name certainly does suggest some Semitic extract in my system. So am I not White then?

Which raises a problem that I can see: you go far enough back, and chances are that somebody in your family tree was not either European or Christian. Which raises the question: how does one define "unmixed descent"? To what decimal place do we define "unmixed," because even Jack Donovan has a very small amount of Northern African blood flowing in his veins. It's all rather hazy, and gets even more so for folks who have poor family records. Which is why I think that, under certain circumstances, Whiteness has to be extended to those with non-White Caucasian heritage.

Which, pace certain racial theorists, race may be far more difficult to define than just ancestral lineages and percent-ethnicities. Is somebody with a proven Jewish ancestor who married into the family 200 years ago automatically considered to be ineligible for Whiteness, even if the rest of his ancestry is completely White and he doesn't really show any interest or great pride in his Jewish heritage? What is the cut-off point that separates Whites from non-Whites?

I knew that if I left "unmixed" without further comment, it would cause trouble, but it was late and I was tired, etc.

By unmixed, I mean "without significant mixture." In my own brain, I have shorthanded that to mean "generally --note the adverb--no more than one non-White grandparent."

That's part of what I meant by genetics is one part, not the whole part of the racial story.

Balkan Muslims, eg, might be just as genetically EuroCaucasian as their Serbian neighbors, but they are enemies of Christendom, so not emotionally attached to "us."

And mythologically, after all, Europa herself was a Phoenician who was "married in."

I think you can be clear enough about this without having to be absolutely clear.

Ah. Well then, if we're going by only one non-White grandparent, I'm in the clear. :)

Unless that grandparent was black. We cannot take any risks...*click*