While doing other chores, enjoying Tremors 3. 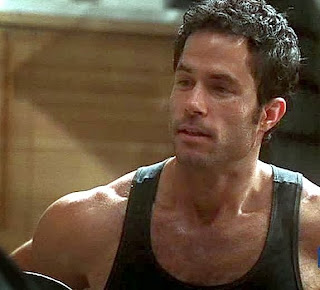 [Now if Shawn had played opposite Fred Ward in the original Tremors, instead of stupid Kevin Bacon...that would have been, well, slash-fiction indecent.]

Like Mars Attacks, this little B-movie subverts its own foreground by making the crazed paranoid right-wing survivalist, well, right. Add the fact that he's played by the same guy who was the uber-lib Boomer parent on Family Ties...And that the Feds who seek to intervene are wrong (and die). Very enjoyable. (That's the politics part.)

As for the religion part, well, it's the environmentalist background which the film makes fun of. Federal regs would evict all the people from their homes if it meant protecting a hostile prehistoric man-eating carnivore.

And then, there's Shawn Christian.

Tremors was filmed in Lone Pine, California, a location famous for politics, sex, and religion. Not necessarily in that order.