In Freud's tripartite model of the psyche --id, ego and superego-- the functions of moralizing and repression belonged to the third part. The superego is a liberal.

One of the imbalances of my upbringing --and the fact that I cooperated with it indicates an inborn inclination in myself-- was an overemphasis on the perfect and the good. For reasons too complex to go into here, I long identified with the good, especially in its particular New York Irish Catholic form, and tried to behave accordingly. There were two and a half elements in me that chafed against this most strongly and eventually led to the undoing of much of the arrangement. The half is my brain and my mouth. Being a very smart Five --at least in the IQ and academic way, if not others!-- and quick-witted, I both resisted attempts to corral my thinking function and expressed my critique bluntly. I was called a "smart ass" many times.

The other two elements were my sexuality and my gender. It's obvious that if you are as homosexual as I am (a Kinsey 6 for sure), you will find Catholicism both immensely appealing and deeply uncomfortable. As readers will note, my discomfort eventually led to a definitive practical break about a quarter century ago, but my appreciation revived and continues. The other element was and is gender. Feminists love to point out the patriarchal evils of Catholicism. To me, these are part of its saving graces. (I feel the same about the pagan elements in it which Prot fundies so decry.) Because Christianity contains a huge infusion of the feminine --the ideology of love--and many men, even a quite civilized and non-violent intellectual like myself, find parts of it very hard to take, almost to the point of feeling that it is alien to my nature. And not just my human nature, but my masculine nature.

Of what do I speak? All the elements in it which counsel non-resistance, non-violence, love of enemies, idealization of the weak, uncomplaining endurance of injustice, extravagant forgiveness. To put it in a nutshell, everything that is connected to "Love your enemies and turn the other cheek."
And to share the image that's part of the complex: when I was a kid, I was tall and very skinny, not imposing. And the occasional times when I was confronted physically or psychologically by another boy, I am to this day not sure what mix of my own fear and self-doubt plus the non-violent superego voice of gentle Jesus made me back down, not stand up; concretely, not fight.

I recently wrote that I would not have a lot of trouble with Catholicism's specifically theological dogmas, or its rituals or its authority structure, but that I could not embrace its morality concerning homosexuality and its "social teachings", from its pacifism, rejection of the death penalty, collusion with illegal immigration to its virtual support for the mommy state. Sexuality and gender.

I am well aware that historical Catholicism, in the long process of its marriage with Western Civilization, is hardly reminiscent of the Amish. I also know that the severe inconvenience of the perfectionist elements in the Gospels has been grappled with by many souls. The traditional device was to separate the precepts of the Gospel --what was required-- from the counsels of the Gospel --what would be optional but better.* This was how the Church okayed self-defense but tried to honor Jesus' more high-minded calls for non-violence.

(That was and is an admirably rabbinic tactic. One of the strange commonalities of Catholicism and Judaism is that they have find ways to make their founders' unreasonable demands reasonable without appearing to reject them. Moses burdens Jews with his 613 commandments. Jesus burdens Christians with his single Great Commandment. How do you hold an impossible ideal and still live a human life on this planet?)

But to a boy with a predisposition toward moral perfection, this was a distinction lost on me in the heat of the moment. While I have come to an intellectual peace of sorts with the sexual issue --I understand the Church's attitude while not accepting it for myself-- I find that my resentment about the "wound" (is that too psychobabblishly dramatic?) to my young masculinity remains.

Not as an argument but as an illustration, I note that many men have found Christianity hard to take because they felt, rightly or wrongly, that being an actual man in this world and being Christian were at odds, that Christianity was really made for women. Even before the feminist assault on the traditional Gospel and its institutions, I remember lots of men standing outside church on Sundays, smoking on the fronts steps, while their wives and children were at Mass. In my one visit to a Muslim country, I noted that the mosques were full of men, while in Catholic Europe, the churches were mostly filled with women. Way back in 1990, gay Jesuit, who later died of AIDS, wrote Wildmen, Warriors and Kings, a protest against the religious feminism that drives out men and demonizes the masculine. 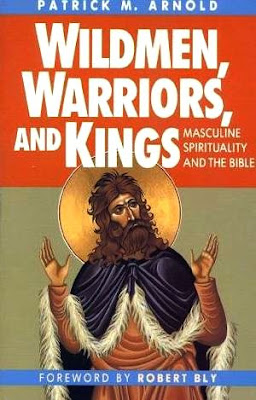 A man's ideas are not separate from his biography. It seems to me that mine can easily be traced back to my life experience. In this I am like everyone else.

I react against certain kinds of moralism and people for whom ethics (usually superego ethics) are primary make me very uneasy. (The Ennea One!). And I have left liberalism behind not only because I was being required to believe things that ran counter to my logic and experience (the stubborn Five), but I was being asked to continue in a secular way the religious rejection of my natural masculinity. It is a dark pleasure of mine to note that most progressives passionately loathe "religious fundamentalism" --except of the Muslim variety!-- and yet I have discerned in them the very same repression, moralism and hatred of human nature that they ascribe to their "Christian right" enemies.


*It was and is common among Gnostic groups to divide membership between the perfect, who kept to the highest form of the religion, and the hearers, who supported them but lived a more compromised version in the world. The hearers rely on the perfect to supplement their spiritual imperfection; the perfect rely on the hearers to provide them with the material means to seek perfection. Symbiosis. Buddhism is like this: the householders support the monastic sangha. Jains, too. Catholicism's celibate elite, priests and monks and nuns, are supported by married householders. If you have a religion of spiritual perfection, you need to do this. Anti-monastic householder religions like Judaism or Islam, don't require that.
at 10:50 AM

I was still a young fella when I first read and liked these things, 'mong others:

"You cannot love everyone; it is ridiculous to think you can. If you love everyone and everything you lose your natural powers of selection and wind up being a pretty poor judge of character and quality. If anything is used too freely, it loses its true meaning."

"Hate your enemies with a whole heart, and if a man smite you on one cheek, smash him on the other! Smite him hip and thigh, for self-preservation is the highest law! ... Give blow for blow, scorn for scorn, doom for doom -- with compound interest liberally added thereunto!"

You might know where these quotes are from already.

You would make a wonderful Talmudic scholar.

You would make a wonderful Talmudic scholar.

Could I ask an obvious question, then: why are there so many gays in the Catholic clergy? (For that matter, why are there so many in Mainline Protestantism, too?) I've seen a program on EWTN and they had on some Catholic monks and they were talking about the need to "re-masculinize" the priesthood but they were over the top gay. Why nobody there just didn't say: "Dude-seriously, you've got to just stop this. It's too painful to watch. Who do you think you're fooling?"

kinsey was a child molestor and a pedophile. He single handedly warped the conscience of millions by his scientific "studies".I feel deeply for all the children he allowed to be abused and molested in the name of research,