Christmas, in Latin Christianity, turns out to be a bloody season. On the 26th, St Stephen is stoned to death. Upcoming on the 29th is St Thomas Becket, slaughtered at the altar during Vespers by an English king (not, for once, Henry VIII). Today another king has a tantrum and it is the feast of the Holy Innocents.

St Matthew notes that King Herod asked the Magi to stop in after they finished their pilgrimage to the new royal child and let him know where he was, so he could go and pay him homage. Warned by a dream, they went home by another route. However:


Herod perceiving that he was deluded by the wise men, was exceeding angry; and sending killed all the men children that were in Bethlehem, and in all the borders thereof, from two years old and under, according to the time which he had diligently inquired of the wise men. Then was fulfilled that which was spoken by Jeremias the prophet, saying: A voice in Rama was heard, lamentation and great mourning; Rachel bewailing her children, and would not be comforted, because they are not. 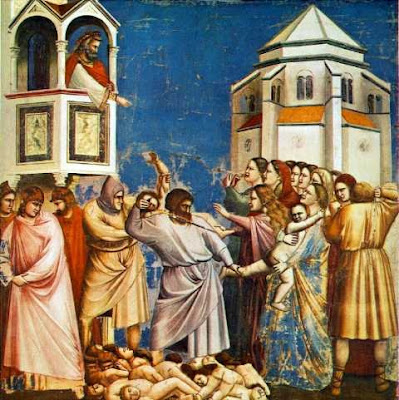 My oldest friend emails from back East:  "Murderous day but great series of chants for the Holy Ones over whom Rachel keened."


Today would have been my dad's 87th birthday. We used to joke that he was born on the right day because despite his WWII experience and working in a tough industry in NYC, he always seemed to carry a certain innocence about the world, which his much wiser children (!) found endearing.
at 9:50 AM

Amazing how Anima escapes attribution of guilt (although Animus escapes guilt too)! The Persian religious establishment (Ham-Japheth-Shem) wish to eliminate the newborn King of the Counter-Initiators so they inform the compliant Edomite Herod of the birth of this supplanter. And they would have reported to Herod where the royal child lay had (Yahweh) not used the threat of a "dream" to dissuade them from giving this intelligence.

Or the probable result of the Slaughter of the Innocents (substitutionary atonement by blood sacrifice) was the desideratum?