To avoid thinking about some things I don't want to think about for a while --what we call suppression, in the shrink trade, conscious denial-- I was perusing and comparing some of the complaints against Rome from the women of the ultra-liberal LCWR, who still operate within the Church, and the men of the ultra-conservative Society of St Pius X, who operate outside(ish) of it. Fascinating stuff, about both gender and organizational psychology. And the consistency of Romanità.
. 
The females, American nuns, studiously avoid the very doctrinal issues which are the heart of Rome's problem with them. I have never seen them once address them. They concentrate on speculation about motivation and on emotional process. They interpret the challenge as about money, as a distraction from the sex abuse issue, as male fear of feminine power, as an attack on their "justice and peace" work with "the poor and vulnerable and marginalized." And they question the legitimacy of the post-assessment meetings because they don't feel "heard" or "seen", but "observed" and "judged."

To a post-feminist middle-class US woman, who seeks (and expects, as her birthright) constant and unwavering emotional validation above all, it's outrageously abusive. 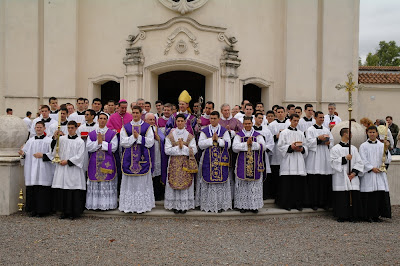 Illicitly but validly ordained traditionalist priests with their reactionary bishops


The males, (mostly Northern) European priests, are obsessed with words, with documents, with the interpretation of texts and history. With issues. It is a conflict over ideas, traditional Roman Catholicism vs What Happened At Vatican II. The head of the organization, though, has laid out in a recent speech all the complications of process around these theological discussions and canonical meetings. For anyone, like your humble correspondent, who has lived in Rome and known people who have long worked there, it was almost hilariously familiar: double messages lost in a Mobius maze of conflicting public and private voices. Two classic examples he notes: one, receiving a strongly worded letter from Rome by mail and then receiving a phone call from the office that issued it, telling them just to file it away and forget it. Another is Rome agreeing to a document after a long and complex discussion and then submitting a revised version for signature, after the meeting, which redefines it to mean the opposite of the original.

To a tidy Franco-Germanic clerical mind, which seeks clarity and order above all, it's crazy-makingly ambiguous.

In 1870, after the newly-formed Italy dispossessed the Pope of his states, the lands of central Italy that he had ruled for 1000 years, he sulkingly withdrew into a role as "The Prisoner of the Vatican". Well, like many apparently absolute rulers, he remains a paradoxical prisoner, but his keepers are the many members of the Vatican bureaucracy who supposedly serve him. What Benedict XVI personally wants has to pass through a labyrinth of other wills, many of which are either overtly or covertly opposed to his. Not a new, or unique, situation. Court life. For instance, he has made the old Mass available again for whoever wants it, but has not dared to celebrate it himself in St Peter's.*

I think Jung might find some of his impressions of male/female difference validated here. I can image that Hell for each of these groups might be spending eternity in each others' company :) As the old Roman saying goes, If you want to keep your faith in the Barque of Peter, stay away from the engine room.


*Speaking of St Peter's and the Prisoner of the Vatican. The new Kingdom of Italy at first offered to leave the papacy part of Rome within the Leonine Walls. These were built by Pope Leo IV in the 9th century after...get this...the Muslims invaded the city and sacked St. Peter's in 846. Yup. Betcha didn't know that. Part of The Religion of Peace's continuous 1000+ years of predation and invasion of Christian Europe. Including a huge slave trade in Whites.