Barry Hussein O's choice of an inauguration poet is yet one more example of the erasure of Whiteness in Liberal America. Mr. Blanco --ironically named-- is in fact White, a European born in Spain. But with passage through Cuba and his "poetic" identity as an immigrant, this "white Hispanic" -- even more than half-Peruvian George Zimmerman-- now basks in the cultural glory and privilege of La Raza. Plus, he's a homo. Cool.

I have criticized Victor Davis Hanson, for whom I have had enormous respect for many years, because he decided he is too decent and upright to admit that what America is about is race, that the 2012 election was even more clearly about race than 2008. He has started to see the light. Or the darkness, if you will. Almost all conservatives refuse to. After all, being called a racist is The Crime Worse Than Which There Is No Whicher. A fear only Whites have to worry about, of course.

One more indication of the Balkanization of America in these figures and images. If only White votes counted, the electoral results would look like this astounding image.

Ninety percent of Romney's support came from Whites and sixty percent of Whites voted for him. But even with 2 out of 3 Americans being White, enough of us voted of O that, barring a revolutionary mass conversion, the future belongs to his kind. Even with that miracle, by mid-century we will be less than 1 out of 2. 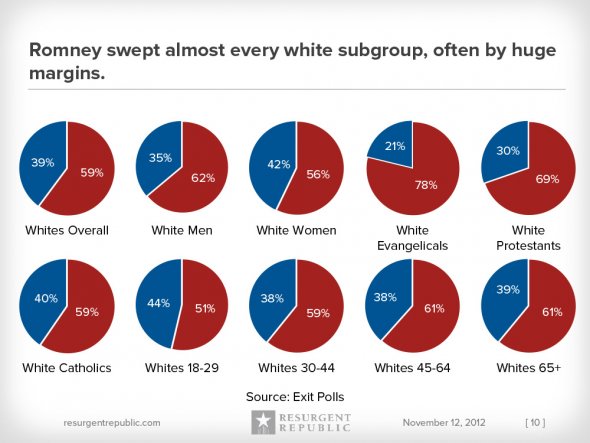