I'm in favor of a lot of traditional things, but not everything old is thereby good. 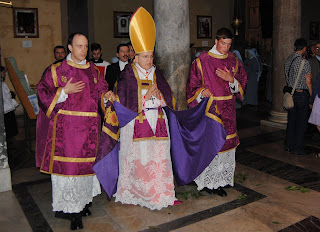 Yikes. Reminds me of the ecclesiastical fashion show in Fellini's Roma. Or some alien insect life-form.

UPDATE. I commented on this, in a politer way, at the site where I found the picture. Lacey albs and stovepipe hats. A firestorm ensued. I was called homophobic. (Moi.) When I opined that the deeper issue might be masculinity and worship in the Catholic priesthood, I was consistently told that holiness and beauty had nothing to do with gender...and this on a site where a male-only priesthood is unquestioned. Funny. One guy called for people like me to be banned and said he knew some lace-wearing priests who could deck me. Touchy boyz.
at 8:58 AM

Rhett Butler turns out to be gay later in life. As senility sets in he struggles to remember a conversation with Scarlett. Something about about drapes, perhaps? Well, if he dresses up in this old tablecloth and his grandmother's peignoir and tea cozy, maybe it will come back to him. And if not, these nice young men will help him get ready for a lovely dinner of pureed everything. Note: this is why I should not be allowed to engage in stream-of-consciousness commentary. Pardon the sacrilege of the ignorant.

You're forgiven. For your penance, three Hey Mary's.