That is a phrase for clerics with a fussily overdeveloped interest in the minutiae of liturgical appurtenances, etc. They may or may not be gay, but I never met any straight ones.

When I dared to comment at another site about my lack of appreciation for smokestack mitres and acres of lacey vestments, as I said, touchiness abounded. One comment in particular irked me, and my reply to it was erased by the moderator. I used no foul language. "Euro snobbery" was the worst  phrase I can remember writing. Oh, and maybe I used the word "doily".

Anyway, this is the little paragraph I found irksome. Apparently the writer found my thoughts equally so.=:


In Rome, among the Italian clergy at least, the whole idea of a discussion linking lace and moral turpitude is just laughable and so absurdly Anglo-Saxon. I was in an Italian seminary, and we were always taught that the depth and quality of lace on vestments should be graded according to the dignity of the wearer and the solemnity of the occasion. And I have always acted accordingly, even in the USA. Those who have a problem with it reveal more about themselves than about any real connection between vestments and the vested.

I learned a long time ago that people rarely listen to what you actually say or read what you actually write. I never implied "moral turpitude", just said it looked silly and unmanly to me. The response did remind me of American sacristy queens who became oh-so-Roman in Rome and did that kind of Euro snobbery thing..."just laughable and so absurdly Anglo-Saxon."

Laughability and absurdity is hardly unique to Anglo-Saxons... 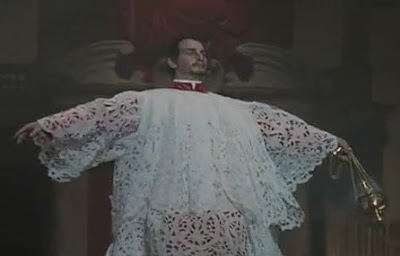 I am reminded of Mrs. Elton's comment at the final wedding scene in Austen's Emma:


I do not profess to be an expert in the field of fashion (though my friends say I have quite the eye) but I can tell you, there is a shocking lack of satin!

Good blogging. ... I'm afraid, though, that I must agree that your use of the term "doily" constitutes hate speech.