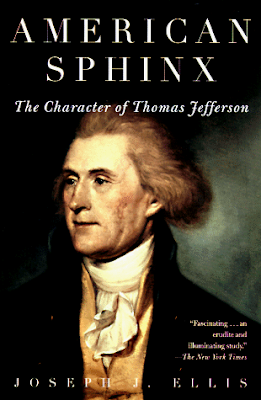 Watching a two hour program on Thomas Jefferson, certainly one of the most complex of the Founding Fathers. He is endlessly interesting, partly because of his complexity and his contradictions. When I was a very young man I spent a year living at Rose Hill (below) in Virginia, in Albemarle County, about 30 miles west of Monticello.

The producers advance the now commonplace notion that America is a creedal nation rather than one based on ethnicity. I have become suspicious of this half-truth, since it often gets translated into seeing America as an abstract ideological project, something I reject. Along with Samuel Huntington. It is certainly not restricted to one ethnicity, but its founding bears the determinative marks of the culture which gave birth to it.

The particular shape of the American "creed", to me and others, is a set of values, not a single idea. Certainly not, as so often assumed now, "equality." And that shape would hardly have been thinkable outside the very specific culture of the founding era. Who else but British-descended educated white men of Protestant Christian and Enlightenment ethos --a complicated but quite specific constellation of values, assumptions, attitudes, etc.--could have created this country? Even within that limit, conflict was the order of the day, as is the way with humans. Jefferson vs Hamilton vs Adams. And that's only three. That the Republic, forged out of 13 diverse and quarrelsome colonies, managed to survive is something of a miracle. And its internal conflicts and tensions erupted, of course, with tragic violence and massive bloodshed some 80 years later in our War Between the States.

I have no great hope that, as the complexion --both literal and attitudinal-- of the country moves us further and further away from the culture of the Founding Fathers, we will survive. I hope I am wrong.
at 9:05 PM