I occasionally run Alternate History narratives through my head, about my own life. If I had not made the choices I made, etc. One of the late-life interests I might have taken on earlier is politics. Not running for office or anything like that, but constitutional law. American, not Californian*!

I just finished John Kekes' The Art of Politics, several of whose other works I have gone through in the last years: Against Liberalism, A Case for Conservatism, Illusions of Egalitarianism, The Roots of Evil, as well as various articles.

He is a philosopher in the Anglo-American analytic tradition, which has dominated the philosophy departments of public and secular universities in North America for many decades. It is not a school of thought I much liked during my philosophy-studying days. I got a C in metaphysics while at Columbia because the professor, of the aforementioned tradition, was so mind-numbingly dry and boring, and trivial, I thought, that I simply stopped studying as a form of adolescent protest.

The analytic tradition tries to stick with ordinary language, use logic and reason, and respect science. Though Kekes' style --very careful and workmanlike-- aims for clarity over verve, and it takes some perseverance to think in such a pedestrian** way, I have found his approach to political thinking very enlightening, and pretty congenial. His work is not so different from his politics: not flashy, but careful, responsible and trying to pay attention to reality, in all its complexity.

It does not mean he lacks passion, which shows up in print only once in a while and thus more memorable for its infrequency. He is a determined and convinced enemy of the ideologies of egalitarianism, whose seductiveness and pervasiveness in the liberal West he deems to be a great danger to the political goods which have made our civilization so successful.

Aside from his very skeptical attitude toward religion (one reviewer calls him "tone-deaf" on the subject), he stands in the wider conservative stream coming from Edmund Burke and continued by such folks as Russell Kirk, but with an American specificity. Kekes must be commended as well for his ability to tolerate the intolerant realm of American academia, where he has been a minoritarian figure in a sea of liberals.

I hope to blog about the book over the next while. The title illuminates his thesis, that politics is an art, not a science and especially not that pseudo-science, political ideology. Ideology is so pervasive in politics on the left that many liberals assume that conservatism must be an ideology, the work of "hard-right ideologues." But most conservatives, who are happy to lay out principles, would say that the heart of conservatism is that it has no ideology. Kekes makes that case intelligible.

In outline, he holds that a political philosophy is ideological if it grants to one value (or to a small group of values) the highest place in a hierachical way of thinking about politics. Libertarianism is ideological in that respect, since it privileges individual liberty above all. And certainly Marxism is an ideology of hard-despotic egalitarianism, the parent of our Western soft-despotic liberalism. I suspect he would be quite critical of the crusade to plant Western democracy in the Middle East, as neo-conservatives would have us do. A nice idea, but how realistically adapted is it to places which lack the presumptions that allow it to work, which value quite different political goods?

What also comes to my mind is the post-Vatican II Catholic shorthand, enshrined in the titles of so many nuns' and priests' commissions, "Justice and Peace". Given the lingo, such endeavors quickly become ideological and most of them --all of them?-- follow a leftist line of overt or covert Liberation Theology, which is Marxist at heart.

Kekes holds that human nature is inherently mixed and that natural contingency and man's flawed character make political arrangements basically defensive (my word, not his) and always needing to be adapted to circumstance. Liberals imagine that conservatives are "hard-liners", when it is their attitude which is strong, but their philosophy is precisely about how to most prudently manage the complexities of change. As well, a preference for valuing historical experience (the best kind of human ethology, reality-based...) over rationalized or revealed programs of change marks most conservatives.

In this book, he makes a list of American "political goods", each of which he then explores. His contention is that all of them constitute our society's complex political framework and all need to be taken into account in a variety of constellations in order to make decent political decisions. Slogan-thinking in politics is attractive, but ultimately unsatisfactory or worse.

I'll try to outline them from time to time. 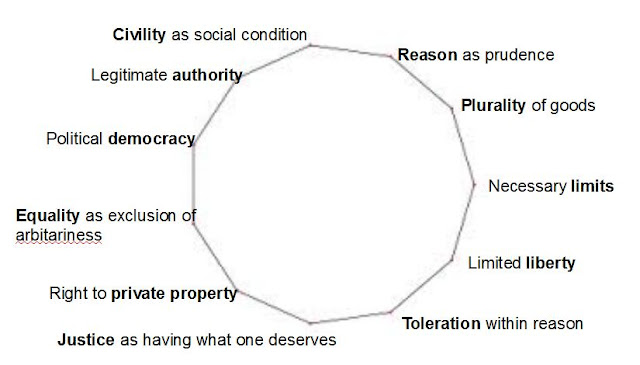 **I mean pedestrian in the root metaphorical sense, of having your feet walking on the
ground rather than flying around.