The current war between Israel and Hamas has brought to the surface --or at least highlighted what was already plain to see-- the great reservoir of Jew-hatred in the world. If you are pro-Israel, as I am, the coverage in the MSM is incredibly one-sided. It almost beggars belief.
And the "collateral damage" of anti-Jewish protests and violence is downplayed by the same media.

In the current liberal West, racism is the most evil crime, hands down. Part of Western suicidality is an internal shame at being white and a granting of moral supremacy and instant victim credit to any group of non-Whites who claim it. The only moral ground, tenuous and never achieved once for all, that Whites can hold is if they embrace this tale and proclaim it. This alone would be enough to explain how the Israel/Hamas issue gets narrated.

The sentimental idea that any human group is without serious defect is ludicrous. Nothing in history or experience provides any evidence of it. So why can you not have a poor opinion, even an active dislike, of a human group? Ethnic, religious, racial groups included. In fact, this kind of dislike is a human universal. I am of the opinion that it is a necessity for group survival to believe that your group is better than all others and to dislike some others, most often your neighbors. Why? Because almost every group in history (White liberals excepted, at least on the surface) believes this. And without that bulwark of self-confidence, you cannot stand against them and theirs.

But, back to Jew-hatred.. Or, as it is formally called, anti-Semitism.

I am mostly a Jew-lover. I grew up with Jews (my language is peppered with Yiddishisms), I have worked well and happily with Jews, and my family is now partly Jewish. I know more about Judaism, and like it more, than a lot of Jews. And I support Israel, even more than some Israelis do.

But, some of me dislikes Jews. As Jews. I do not cringe about this, nor am I ashamed of it, because in the three and a half instances I will note, members of this human group annoy the hell out of me precisely by the behavior involved, combined with their Jewish identity. It is in those moments that my anti-Semitism appears.

Two point five of the instances involve behaviors not unique to Jews, but when Jews engage in them, it is as Jews that I dislike these people. Their Jewishness is part of my reaction. Another is one which only a Jew could carry out.

Two point five of these contexts provoke me to irritation and dislike, but nothing more. So Jew-"hatred" is not involved, not even close. The third offends me, makes me angry, and I find myself wishing I could find some way to damage these people.

Item one: Well-off and successful American Jews who invoke the Holocaust or some other narrative of Jewish suffering to inflate whatever blockage, inconvenience or slight they feel into a genocidal crime, hoping to induce in me and other Gentiles a sense of guilt or shame. Being on the receiving end of this kind of manipulation only makes me resent them as Jews. Jewish victim groups. Upper middle class American Jews who want to make some kind of equivalence between being excluded from a country club and being herded into cattle cars...well, it burns me. So patently self-serving and rather obscence, actually.

Item two: (This is one unique to Jews). When a Jewish scholar takes his shared Jewishness with Jesus to point out to Christians that they have completely misunderstood Christ. The argument comes down to shared blood and the same attitude you used to find on stupid t-shirts: "It's a Hebrew thang, you wouldn't understand." A smugness that irritates me.

Item three: (And this is the strongest by far for me). Jews in America, especially, who adopt a leftwing or progressive stance which makes the very country that has welcomed them the source of all the world's evils and do what they can to damage it. The ikon here is Noam Chomsky. Or Howard Zinn or Saul Alinsky. The ACLU and its war on Christianity. But Hollywood Jews and the armies of Jews on the left are included. What makes this different from my dislike of leftists generally is that I deem it a special case of ingratitude approaching betrayal. What other Western country has been as welcoming to Jews as America? To be an anti-American Jew pushes deep and dark buttons in me.

And the fourth is the pushy Jew, the kind who, in a discussion or even on line in a store, reacts with an unrelated and arrogant aggression. That's not something I run into very often, but when it happens, the person involved becomes not just another jerk, but an Other Jerk, an alien. The ordeal of civility.

One of the good things I have learned from my years in psychology, especially Jungian, is the value of differentiation: to try to calibrate emotional assessments of provocative phenomena into discreet parts. So, as I said, my attitude toward Jews is at least 90% very positive. And I have had and have personal connections with Jews who exhibit the stereotypically positive traits of their people: a warmth, generosity, loyalty, humor, intelligence, and related straight-forwardness which has a particularly Jewish feel.

And even with Israelis, who are famed even among American Jews for their abrasiveness, I would take them over the surrounding Muslim sea any day of the week. 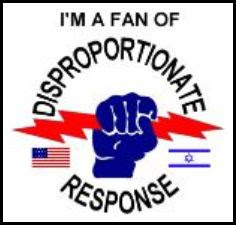 As a Jew myself, I agree with your comments. Another one that steams me is the Ultra Orthodox community in Israel who will not serve in the army. Demanding that 'lesser' Jews will defend them with their lives.

Maybe in America this matters less, but in a tiny country like Israel - this is unconscionable. Yes, the Ultra Orthodox have been victims of terrorism, but they need to be part of protecting Israel.

"...an Other Jerk." Instant classic turn of phrase, that.