Even with lace in the albs and surplices, there is much truth in this comment: he loves the traditional Latin rites because it is masculine religion. There is a hierarchical dignity in the old Mass and that is distinctly masculine. Men are openly hierarchical by nature. Find me a gang that is run by consensus(1).

Women shrink from such frank and structural displays of rank, preferring their own dishonest subtler modes of creating pecking orders by degrees of affiliation.(2) How men and women value and navigate the cross-currents of structure and connection are both opposite and complementary. But certainly opposite.(3)

Either stripped down to essentials on a battlefield

Or at High Mass in a church:

codified gestures of recognition and submission
within solemn and restrained ritual and a male hierarchical structure
combining royalty with sacrifice. 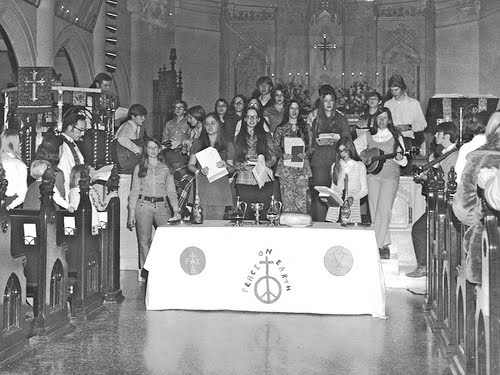 Christianity once played the role of softening the rougher edges of men, to allow civilized life to grow beyond barbarism, a task in continuity with the classical Greco-Roman world, which, at its best, trained the male passions because it respected them as a primal gift of nature. It promoted the strength, the courage and the skill that makes males thrive and gave men codes of honor to complete the archetype. 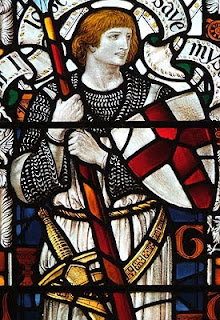 The Christian Knight
(The only kind of knight, in fact, there's ever been.
The knight is a unique creation of European Christendom.)

Now in collusion with feminism and liberalism, it joins them in deriding and pathologizing men and all things masculine, a danger inherent in its mythic and moral structure but once held in check by orthodoxy and by the cultural self-confidence --part of which derived from a Christian sense of theological superiority to others(4)--of Europeans and Americans.

There are now only two ways in which Catholicism acts as a bulwark of the masculine: limiting the priesthood to males and maintaining marriage as a male-female institution. The unspeakable principle that prevents women from being ordained is not essentially different from the one that makes egalitarian marriage un-Christian: that male headship, aka patriarchy, is as normative to the human species as heterosexuality.

Fear of the rage of their Cultured Despisers --which includes a huge number of people of both sexes inside the Church-- makes them avoid that connection. They're pretty up front about male-female marriage because they can make the argument about children.

But when it comes to the masculine priesthood, they just sorta throw up their hands and say, Well, Jesus didn't give us the authority to change it. No mention of the unique virtues of the masculine that suit men for priesthood, but exclude women. The unspoken implication of the official line is that either they can give no respectable reason to resist the priestesses and that, given their druthers they would go along, but their anointed hands are tied. We don't know why, but Jesus made a different choice. Don't blame us, we're just following orders. Sorry.


It seems to me that in every other way, the Church has succumbed to the egalitarian idolatry of the degraded children of the Enlightenment and to placating their new center of gravity in the Third World.

(1) There is much wisdom in the saying, "Men are dogs." Dogs without a pack become neurotic; canines need to know their place in the group or neither they nor the group can function. Left to their own devices, informally and formally, human males create gangs and teams just as naturally. Male-exclusive gangs and teams. The feline and the feminine, on the other hand, are not associated by accident.

(2)The "Roman Catholic WomenPriests" are a laughingly apposite example. Condemning male hierarchy in favor of the feminist "discipleship of equals", what is their obsession and raison d'etre? Possession of the power of male priests!

The logic of a "discipleship of equals" is either a) no priests or b) all priests. But these silly and deluded women --living up to millennia of the stereotypical irrational and self-contradictory female-- not only seek elite power (to use, of course, only to promote equality and inclusion...) but assert themselves as Roman Catholic priests when the very act of being "ordained" excommunicates them.

(4) This is a sense of superiority which is now only allowed to Muslims.

My sister had this insight into female behavior: men are very frank about their creation of hierarchy, but gain a subtle equity within a group due to being a member of the group and actively honoring the authority dynamic between individual men in the group. This is why, in a group of male friends, men of different levels in the hierarchy will still treat each other more like equals than master-servant, or some other dynamic. Conflicts between men are expected to be resolved directly, whether by discussion or combat. Ideally, the men reconcile quickly and their friendship is restored.

Women are different. Women in a group all want to be Mommy. Females will come together in a group and begin subtly working to establish themselves as Mommy, or aiding a more powerful female they admire more than other candidates to become Mommy. Once one female establishes herself as Mommy, the remaining females become Daughters to Mommy, and Sisters with each other. It is the duty of the Daughters to protect Mommy from upstart Sisters and to enforce Mommy's code of conduct, ruthlessly if necessary. If Mommy proves incompetent, a cabal of Sisters will play queenmaker for another and attempt to dethrone Mommy. Female conflicts are not dealt with openly, but by subtlety and subterfuge. Status-reduction and man-stealing are preferred methods of conflict resolution.

Her being a woman, I am inclined to give my sister credence. What do you think?

The male description is often true.

I had never thought of the Mommy element with females, but here I would bow to your sister's experience.

Which would not be out of sync with your comment.

Six pack albs really turn me on.
Or is it a six pack of albs?