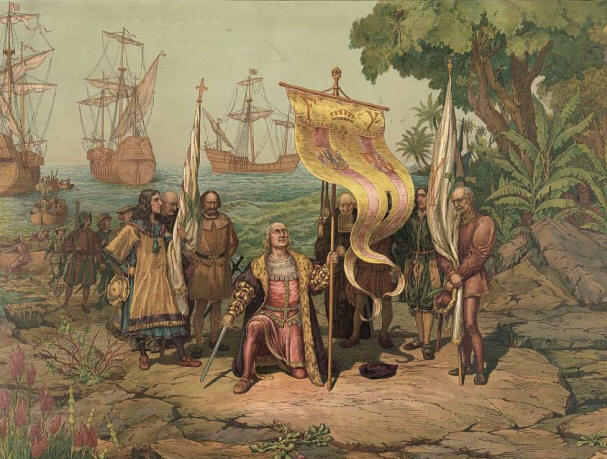 My annual note and protest about a day whose meaning has been marginalized and kidnapped by the forces of civilizational dismantling.

I had dinner with a family last night whose now adult children were educated in the Berkeley school system. So today is "Indigenous People's Day". The other days they celebrated were MLK, Malcolm X, Earth Day...the whole sorry panoply.

As I mention each year, it is a sign of decline indeed when the day which used to celebrate the beginning of the civilization of which you are a part now is either passed over in uneasy silence or reversed into an atonement day to the people "we" conquered.
But of course, there is very little "we" left, unravelled in the course of a single generation.
Mine.

A Jewish blogger whom I read has a relative who refuses to celebrate Passover. Because it would mean validating the divine plagues against The Egyptian People, etc. Celebrating his Jewish existence would mean condoning the events which made him possible. And he is so ethical that he will not do that. I wonder if he refuses his birthday because of the pain he caused his mother in childbirth.

There is a stock character we have all seen on TV and in the movies. The Prophet of Doom who announces the destruction of the world because of its sins. And he is gleeful about it. His self-importance and joy come from publishing the downfall of his neighbors at the hands of a Just God who has, of course, chosen him as his spokesman.

As in so many post-modern Western phenomena, I see in the people who avoid Columbus Day or who refused to mark Passover the same kind of split: personal ethical inflation gained by devaluing the collective to which one belongs. And the collectives, themselves without confidence, tolerate or even reward these dismantlers rather than thrashing them soundly and casting them out.

The occasional mad preacher was one thing, but now we have a culture full of self-congratulatory sophisticates who are, in effect, saying Amen --pardon the Christian reference-- to their own erasure.

The problem with these folks, the bien-pensants of the declining West, is that they are too good for this world. Paradoxically, their secular humanism has produced a cohort of angels too pure to remain embedded in the world which shapes them.

How marvellous that there's a Jew »who refuses to celebrate Passover because it would mean validating the divine plagues against The Egyptian People«!

I suppose this person doesn't believe that the plagues or the passover actually happen'd, but are merely nation-building myths. In that case, why not have an inclusive Passover, which celebrates forgivingness: Jews could forgive each other directly, and pray to Earth that they would be forgiven for participating in the crimes committed by whites against the subaltern downtrodden.

But if this person believes that the Plagues and the Passover really happen'd, then his duty as a Jew is not to walk away from the whole celebration, like Pilate washing his hands of the Christian version, but to protest to yhwh (rather as Abraham did in Genesis 18:23ff), arguing that an inclusive Passover should have been provided for all the population of Egypt. Again, an inclusivized Passover celebration, with forgiveness between whites for trespasses and praying for forgiveness from non-whites who do only non-trespasses.
er
P.S. Happy Canadian Thanksgiving. You can watch a documentary on the War of 1812 tonight on PBS. I wonder, was there a General Westmoreland to blame for the Americans' bungling the invasion, eh?

Really I think Columbus Day ought to be celebrated as AmerInd Thanksgiving Day or Welcoming the Obedient-Will-To-Power Blame Inheritors Day.

er, author of "Scared Straight by Nietzsche: Liberals and Orientation Change toward the Road to Islam" (formerly publish'd as "Heidegger's Dantean Holzwege as Detours to the Sirat al-Mustaqim")