Roku wrongo in Black and White 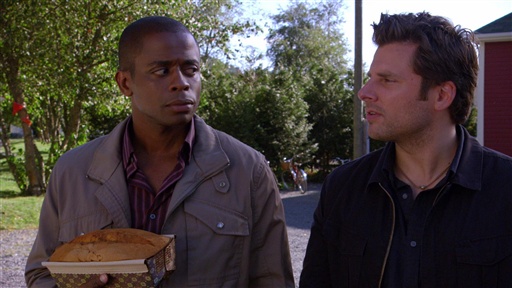 Via Roku, I can watch all 79 episodes of Psych.  I chose Dual Spires, the quirky take-off on Twin Peaks where the boys investigate a suspicious death during the Cinnamon Festival in a town so small its name on the map is in parentheses.

A small moment indicates some of what is wrong with our current social contract. Gus tells Shawn that he wants to get out of the little rural burg because "it has no cell phone service and it's all fulla white people."

This is supposed to be amusing and we are supposed to sympathize with Gus and feel a little bad about such a retrograde whitebread place. But imagine a switch, where Shawn* wants to leave somewhere because "it's all fulla black people."  Now we'd have An Important Moral Issue on our hands. And Shawn would suddenly be a reprobate.

Hey, I can't help it. I'm a shrink; we notice small things.

In this case it's "Black Privilege", the ability of any Black --from your local homeless drug addict to Oprah and Obama--to take the position of a victimized minority, for any reason, at which point the job of Whites is to feel embarrassed and sympathetic and, above all, not be critical.


Reminded me of a vacation with my ex years ago, spoiled partly because he freaked out that Portland, Oregon was so white. No one was anything but polite to him. Just that demographic fact seemed to give him some kind of justification for judging and acting out. If I had responded similarly in Harlem or Bayview-Hunters Point in SF, there'd have been all hell to pay.

As I've said before, the real basis of the multicultural myth is that Caucasians must never be left alone in groups; Whites in a group by themselves are intrinsically pathological**. And what is so distressing is that Whites play along with this and enforce it on one another, when the evidence suggests something quite the contrary.

As Shelby Steele pointed out, the current creepy agreement between Whites and Blacks is that Whites can rent some racial innocence if they grant Blacks a lot of licence and deference. Which, however, Blacks can rescind at any time. It's a weird and unreal social and moral reversal. Very unhealthy.

But the rest of the episode was funny.

*The pilot episode was in 2006. James Roday, who is still sexy, has gotten a big chunky since then. Back in 06 he was even moreso. Sexy, that is.

**Like all male groups, etc. Without the redeeming presence of wymyn, they are patriarchal old boy clubs. Even the locker rooms of men's sports teams must be open to female reporters.
at 5:32 PM