That's Shakespeare, a Dead White European Male, for those of you multicultural types who think that Toni Morrison is the new Jane Austen. Hell even Jane Austen wasn't. Aren't all her plots basically the same story: middle class girls looking for husbands with money?

So. It looks like my next door neighbor's cat is on his way out. I have known Sonny since he was a kitten. My neighbor and I share a back porch, so the feline has always considered my place as part of his range and I think of him as my cat-nephew. A handsome and assertive fellow, white and yellow with blue eyes and a weirdly unique meow. He's in his middle teens, at least, a very long life for a cat. And clearly an old, old fella now. Skinny, mostly blind and, I suspect, mostly deaf. He moves slowly. I suspect he has stopped eating. Has spent the last three days in my house, sleeping almost 95% of the time. He's very quiet now, not the voluble type he used to be. Last night he got a claw caught on the pile of my living room rug and couldn't extricate himself; just sorta collapsed, tired from the little effort. Mortality is in the air.

6.23 Update: The little old guy is dead. I found him in my hallway this morning; he had hidden in a closet overnight and stumbled out. He was like a little rag doll, but still breathing. Wouldn't drink water or make any noise. I wrapped him in towels, called his owner, who came from work and took him to the vet, but he was too far gone. His temperature was 4 degrees below normal. Fifteen years old, actually. I'll miss him, even though he liked to sit right on my laptop keyboard. Here he is as he was in better days: 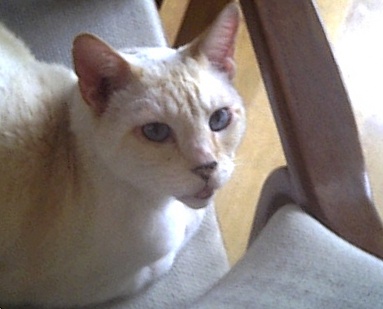 And, this may be TMI, I am almost, but not quite, recovered from some bacterial invasion which settled in my lower GI tract. Musta been two dozen trips to the throne in a 12-hour overnight period.
Tiring. If not mortality, then a reminder of what the flesh is heir to. (That's Shakespeare as well.)

Watched some more of the Why Does Evil Exist? series with my friend Bill. Rabbinic Judaism and Islam on evil. Amazingly, for a people whose history is loaded with disaster, Jews have largely hewn to a pretty mundane approach to human badness as a natural inclination to selfishness that you can kind of expect from a finite creature. Until the Holocaust. Which has made some of them wonder if the "cosmic, metaphysical and melodramatic" approach of Christianity to evil might not have some merit.

The lecture on Islam focused on a Quranic story of Iblis, the Muslim Satan. I am no fan of the Quran, as you might expect, but this re-telling of the primeval fall in heaven is quite rich.


11. It is We Who created you and gave you shape; then We bade the angels bow down to Adam, and they bowed down; not so Iblis; He refused to be of those who bow down.
12. ((Allah)) said: "What prevented thee from bowing down when I commanded thee?" He said: "I am better than he: Thou didst create me from fire, and him from clay."
13. ((Allah)) said: "Get thee down from this: it is not for thee to be arrogant here: get out, for thou art of the meanest (of creatures)."
14. He said: "Give me respite till the day they are raised up."
15. ((Allah)) said: "Be thou among those who have respite."
16. He said: "Because thou hast thrown me out of the way, lo! I will lie in wait for them on thy straight way:
17. "Then will I assault them from before them and behind them, from their right and their left: Nor wilt thou find, in most of them, gratitude (for thy mercies)."
18. ((Allah)) said: "Get out from this, disgraced and expelled. If any of them follow thee,- Hell will I fill with you all.

Shocks natural and supernatural.
at 10:53 AM

The interesting Iblis story has has some pre-'Slam predecessors:

There's an interesting idea that the angels are supposed to prostrate themselves before / worship Adam because he is made in the image and likeness of God. This sort of makes Man into an idol - a very unique God-made and approved idol -- and Satan sounds like an idol-breaker-- why should he worship what is only "made of clay"? When he is made of fire (=spirit?). The theme is Spirit must bow down to flesh, perhaps?