I wandered onto a blog yesterday where a Catholic man who is "same-sex attracted" holds forth on the virtues of seeking sanctity through celibacy, etc. While I understand, intellectually and historically, why Catholicism can only validate traditional marriage as the place for sexuality, it always pains me to run into an actual homosexual Catholic who tries to live this out. It is in the realm of personal experience that the doctrine runs aground for me.

In this fella's case, he was wondering if he had been stunted or damaged because his father had never sat down with him and had The Talk, explaining the realities of sex. Well, my dad did just that and I remain very "same-sex attracted", so...

But what is sad is a comment he makes, admitting that language about sex being an act of love is "completely foreign" to him. In his few dozen sexual encounters with other men, he reveals that only one of them had any reason to think that he might love him. I ran across this same theme on the blog of another "same-sex attracted" Catholic who is now rather famous for his gay-defiant orthodoxy. He plenty of experience having sex with other men, but had no experience of making love with another man and could not imagine how male-male sex could possibly express love.

Well, someone is indeed stunted or damaged. That is a sad thing to hear.

I can understand why people who have no direct experience of male-male sex find it upsetting or even repulsive. As I have said, it involves physical gestures which to most people signify degradation, pain or dirt.

And I have also noted that for very many people who are heterosexual, their own "natural" gestures are often seen in a quite similar way. The paradox of seeing sex as both exciting and disgusting is hardly original. It feels almost archetypal.

I also know from experience that the repertoire of sexual gestures available to men with men is capable of a wide range of meanings, good and bad, but that love is one of them. 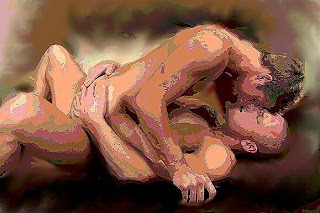 To continue in the Catholic mode, all of human life, sex included, lies under the sign of the Fall. The tragic element in creation is enormous and flawed humans enact flawed lovemaking. Is there selfishness, dishonesty, wrongheadness, illusion, mere mistake possible in sex? Can it be part of heartbreak? Of course. Not because it is sex, but because humans do it. But humans they are, and lovemaking it can be.

Perhaps the poor man has just never been properly kissed.