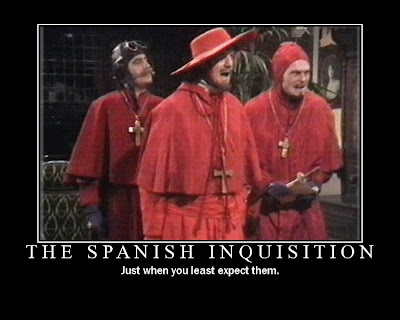 I am one of those conservatives, not totally unusual, who do not (or no longer) practice their ancestral religion, but hold it in high esteem and hope for its health and thriving. Inconsistent? Maybe. There are lots of things I am in favor of that I personally do not participate in.

Anyway, in my cyberwanderings, I came across the remnants of a controversy about Roger Haight, a Jesuit theologian who re-interpreted Christ in a way that Rome found seriously deficient. His book, Jesus Symbol of God, --that kinda gives the game away right there--was widely praised by the theological professoriate, who had previously made him president of the US Catholic Theological Association (no nest of Rome-lovers, they). After he basically refused to change his positions, he was refused permission to teach Catholic theology by none other than the current Pope, then Cardinal Ratzinger.

You know, when you consider the range of discipline and punishment formerly meted out to theologians who fiddled with the Trinity, the Incarnation, the Resurrection or the Mass, etc. being told not to teach is a very modern and very mild rap on the knuckles. And when you consider what job a Catholic theologian has, especially an ordained one, what else could you expect? "Yes, we know you hold positions contrary to important Catholic doctrines, so we will let you continue to teach them"? Look at what crossing orthodoxy merely on race and gender cost Larry Summers!

Anyway, he complied, Father Haight did. And then got a job teaching at the uberliberal Protestant Union Seminary in New York. And wrote yet another book on Christ in the very same vein. Now he has been told he may not teach systematic theology or Christology anywhere, at all. He can teach other things, but not those.

An Orthodox theologian, John Garvey, very ecumenically reviewed the second book and found it thin: "The Jesus offered in The Future of Christology would not scandalize a Unitarian" and he applied to it Lincoln's dismissal of Douglas's arguments, "as thin as the homeopathic soup that was made by boiling the shadow of a pigeon that had starved to death." Ouch. But the Orthodox are very, well, orthodox that way. You would hardly expect anything else.

I recall reading a glowing review of Haight's work in a Jungian journal some years ago. The author's praise seemed to be based on her assumption that Haight had given up thinking that Christ was anything more than a symbol. Seems the Romans and the Jungians were on the same page there.

But there was a quote from Haight in the Garvey review that struck me and that is the inspiration for the posting title and suggests the pomo ethics whence the project actually proceeds. Here it is:

In our new stage of the history of the human race ... we cannot in principle provide a metaphysical grounding for competition and imperialism by defining Christianity as the only true religion, thereby relegating other religions as inferior to Christianity."

Roger, can you spell Islam?

Islam, the most (literally) explosively active and self-confident religion in the world, is completely clear and wholly unapologetic that it is the perfect and final revelation of God, meant to dominate and eventually replace all other religions, including the Jim Crow "religions of the book." How do you expect to confront that with the emotional and epistemological armory of a pomo United Church of Christ professor?

This is the kind of insulated liberal egalitarian-loving stupidity that makes me think these otherwise bright people are deaf dumb and blind. In their cultural milieu certainty is seen simply as arrogance. Unless it is certainty about the things they are certain about. (See above mention of Larry Summers).

For some very specific reasons, I do not practice Roman Catholicism. But it has the potential to be one of the few bulwarks in the West against the totalitarianism of resurgent Islam. Why take away one of its most powerful strengths against an ancient foe in order, yet again, to please a few of middle-class Christianity's cultured despisers ?

I am reminded of Flannery O'Connor, perhaps America's only great modern Christian writer.
She was a staunch, if idiosyncratic, Catholic in the Bible Belt and was famous for her bizarre characters. When someone proposed to her the idea of the Eucharist as a symbol, her reply was,
"If it's a symbol, to hell with it."
______________________
at 5:06 PM

Very funny: "Roger can you spell ISLAM?" ... Maybe the purpose of putting Islam on Xnty's ass was to compel Xnty to be the royal even imperial religion (again)?

I've read such an argument before and it really baffles... It is as though the person talking about religion has completely missed the point of the religion they're talking about.

It occurs to me that there's an easier way to sum up the discussion. "That guy is a heretic."