What's wrong with homosexuality I: prelude with Apostles' Creed 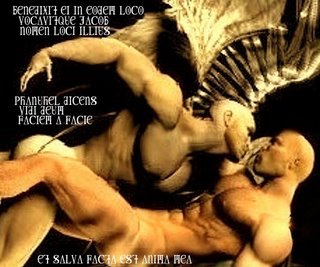 (I’m going to do this in installments.)

“What’s wrong with homosexuality?!!”. Aha! See! Now the self-loathing, the deep internalized homophobia of the rightwing faggot comes out. We knew it. Self-hating. It was just a matter of time…

When I was in theology grad school, a colleague was about to make an appreciative presentation of the determinist behaviorism of BF Skinner. He decided to assure our class and prof of his orthodoxy by reciting beforehand, in its entirety, the Apostles’ Creed. This post is my Apostles’ Creed.

I am familiar with the moral, religious, psychological, even some of the medical and scientific arguments about homosexuality, including the ideas of them what are agin’ it.

In the final personal analysis, none of the negative arguments have made a dent with me for one reason: they simply do not match my experience. Despite my severe level of over-education, this is an issue on which I grant highest privilege to personal experience. I am well aware that I am one human among billions and am as epistemologically and morally challenged as the rest. But my experience has been that male-with-male sex is wonderful, sometimes unspeakably wonderful. Not only wonderful, but so deeply congruent with who I am that there is nothing in this world that feels more natural to me.

I tend to get a little dissatisfied now and again and fantasize alternate lives for myself. For example, “food critic for the New York Times, with the metabolism of a greyhound”: indulging my most ancient vice, making a living at it, and without undesirable consequences at the waistline. I am thus capable of imagining the impossible. But I never imagine me straight. I tried once, and I can’t do it. I would be unrecognizable to myself. I would disappear.

I sometimes opine, with an air of playful exaggeration, that when I am in the midst of fine fine sexual engagement with another man, that it is then I know why God created the world. I am far more than half-serious. Sex is not just “sex” for me; there’s a mystery in it, mysterium tremendum et fascinosum. Sweet or raunchy, it’s sacred.

All intellectual bells and whistles aside, that’s the real beginning and end of the story for me. Is it always wonderful? Of course not. This is planet Earth. But when it's been flawed or flat or, in hindsight, a mistake, it's not the samegenderishness of the participants that made it so but our membership in the species homo not always so sapiens. To use the phrase of the execrable Gore Vidal, I am a fully initiated, enthusiastic and committed “homosexualist”.

If anyone wants to read self-loathing into this so far, be my guest. I’d be fascinated.

The problem with homosexuality? See next posting.