In the fall of 2004, I revealed to a longtime friend that I was thinking of voting for George Bush. He emailed me that he feared for my mental health….was I lonely? angry at something? was I afraid? What had provoked such an intelligent man into becoming the ally of Nazi skinheads?

He wasn’t joking.
So, why would a gay man…especially such an intelligent one (I get that a lot)… even consider aligning himself with “the rightwing”?
There are lots and lots of small moments of cognitive dissonance involved, over many years. My liberal mind told me to see one thing, but my eyes were seeing another. Often it was conservatives who were willing to describe it, when liberals kept lying. And it became clear to me on a personal level that liberals were, as humans, not one whit more evolved or moral than the Neanderthal righties they held in such contempt. And then September 11th happened. 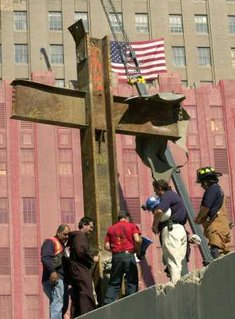 The simple answer to the question is this: only in the Western world can a gay man live a free life as himself. Hence, the health and strength of the West is fundamental to my survival.
And now that Islam is resuming its war against us…and I suspect that we will one day be at war with China as well…the only country that can protect the West is the United States of America. So the health and strength of America is the central tenet of my politics.
Liberals will say that they share this value, that they too love America.
But context is all.
I say that we are at war with Islam. And so for me the health and strength of America means that our society functions at a high level both of dynamism and coherence, and that we have the economic and military clout to defend ourselves against the Jihad.
And at the heart of this is a civilizational will to survive, cultural self-confidence, unapologetic and assertive commitment to our survival. And this is what liberalism lacks. It is well-said that liberals find themselves morally disarmed in the presence of anyone they deem less fortunate than themselves. The people who have this will, confidence and commitment are almost all conservatives. And so I throw in my lot with them.*
" But conservatives are so homophobic!" Yes and no. Some are. Many are not. Just because someone fails to see why, after thousands of years, it should suddenly be an urgent and basic human right for two men to get married does not mean that they are homophobic. It may mean that they are understandably puzzled. In any case, I am willing to have both intellectual debates and political fights with them within our system because they are my people. They are fellow-Westerners, fellow-Americans, who love the civilization in which they live. Whatever our differences, we can work them out eventually and they are not likely to behead me in the process.
Liberals, who profess to be open to and tolerant of me as a homosexual, are unfortunately just as open to and tolerant of Islam, which would have me crushed under a wall or stoned to death. They can’t have it both ways, and they really don’t know what to do about the conflict. Liberals are moral narcissists; their anxiety to be seen as good in the eyes of those they deem victims usually trumps any other value. In a pinch, I don’t trust that they’d stand up for me and my kind if it meant that they had to assert the superiority of our (white) civilization over that of (non-white) Islam...especially by force of arms or tough policy choices.
My active and enthusiastic disbelief in Islam makes me a "kaffir", an "unbeliever". Though I have not focussed on it here, my commitment to a sovereign and coherent America makes me a "gringo", one in strong opposition to the mass illegal immigration from Mexico. "Kweer" is just whimsical spelling for "queer"...and perhaps a way of distancing myself from "Queer Studies" and other Frankensteinian passtimes. So I am proud of being gay, Amurrican, and of holding that Allah is not God and that Muhammed is most definitely not God's messenger.


So, whether you agree with me or not about this very cartoonish sketch, let me make it clear that it is precisely because I am a gay man that I have crossed over to the Dark Side and cast my lot with the right, warts and all. I'd rather go to the ramparts with the irascible folks who want to save our town from the invading barbarians than stay at home with the charming pacifist intellectuals who argue about re-designing the bedroom. 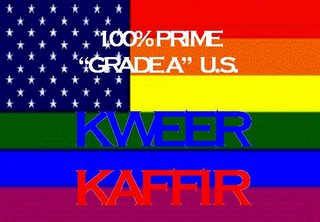 To put it in polite language, I am a Western fundamentalist, an American nationalist of Anglospheric sympathies and a deeply homosexual conservative…or, as my profile says more cheerfully, “a proud Kweer Gringo Kaffir”.
*There are other reasons, too, but I'm trying to keep this focussed.
at 10:59 AM