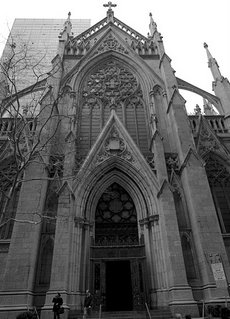 Saw this film again, Trembling before G-d, --out of respect, religious Jews do not fully spell the divine name-- about the conflict between faith and sexuality among homosexual Orthodox Jews…tough to watch, because there seems to be no possible resolution. Even though parts of their tradition are highly alien, the personal tension is painfully familiar.

I remember years ago, during the worst of the AIDS period, after I had finally left (well, "fled" is a better word) the Church which had dominated and shaped my life for four decades, walking through Manhattan with my boyfriend. We went down Fifth Avenue and came upon an ACT-UP demonstration in front of St. Patrick’s Cathedral. We stopped to look, then moved on. About a half-block later, as we turned a corner, I heard this funny noise. I looked into my boyfriend’s face. Nothing. Then I realized... it was me. I was sobbing.


There, in that moment, the two warring parts of my soul had met: the tribe of queers who were fighting for our lives, on the steps of the great temple that my Irish Catholic ancestors had built. There was nothing to do, but weep. It was a long time before I stopped.