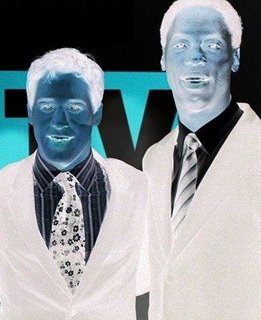 On the set of the TV series, “Grey’s Anatomy”, castmember Isaiah Washington referred to fellow castmember TR Knight (out of his hearing) as a “faggot”. The ensuing drama is depressingly diagnostic of so much that is wrong with us.

It turns out that TR is in fact a faggot and, post-slur, came out. Welcome, TR, to our club.

Newly-out faggot TR responded to this incident by going on the Ellen DeGeneres show and looking wounded. She sympathized, of course, and also wondered why, in this day and age, people should be so hateful. This is part A of the depressing part. (Did I miss the memo informing me that homo sapiens had evolved into a new species? Never mind.)

Then we have Washington denying he said it, and then people apologizing for him, and then him apologizing personally, and now –here’s part B of the depressing part—he is supposedly checking himself –at the urging of the network executives --into “a treatment facility” for “counseling” to discover why, why, why he would utter such “hateful” words, words for which "a mere apology is insufficient". (Thank God those Commie Red ReEducation Camps are closed.)

This is not the way real men would deal with this. It combines therapy with celebrity, publicity and mendacity. It is unseemly, undignified, whiny, ridden with victimism, pussified, unreal and pathetic. There is not a cojon in sight.

In a healthier society, where it was ok for men to be men, this is what might have happened instead:

Washington would have lost his temper and referred to TR as a faggot. When informed of this slight, TR would have stormed into WAshington’s dressing room and said, “What the f**k is going on, Washington? You called me a faggot? Well, guess what, jungleboy, I am a faggot and damn proud of it, you stupid motherf**cker!”

People would hear the commotion and shouting and come running. Washington and Knight would glare and yell a little more and then make a move and come to physical blows, complete with more orientational and racial epithets exchanged. There’s a large and expressive vocabulary there and we all know the words. (Even in "this day and age").

They would be pulled apart, seething, uttering threats, and they’d be dragged off to their respective corners and told by their friends to calm the f**k down.

Then the head of the program would see each of them and say that they could not have this kind of carrying on and that the two of them must apologize and shake hands. They’d both resist, of course, but a hint that their contracts would be terminated might, as Dr Johnson suggested, “wonderfully concentrate the mind”. Accompanied by supportive-and-disapproving colleagues, they’d apologize, thusly.

Washington: “Sorry, man. I got carried away. I shouldna said that.”
Knight: “I crossed the line, too. I was mad. Sorry.”

Washington: "You're tougher than you look, by the way."
Knight: "Yeah, I get that a lot."


They shake hands. Everyone claps, and leaves.

Later on, the two guys pass in the hall, slow down and eye each other.

They go out for a drink later and become friends.

You can see how far from grace I have fallen.