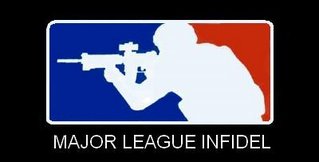 This is, as Harry Potter would have it, the War Against That-Which-May-Not-Be-Named.

The enemy here is not Terror. It is a very specific enemy, who uses terrorism as its weapon of choice. The enemy is Muslim.

Should we call it, then, the War with Islam? My guess is that is what it will finally come to. This is just the first stage. It literally exploded in our midst on 9/11 but started earlier...we just didn't want to know it.

For the moment, though, we are on the receiving end of Jihad, the armed Muslim “struggle” to make Islam triumphant. It's how most of the Muslim world became Muslim.

So this is the War Against Jihad. It's specific, clear and simple. Jihad is primarily armed warfare on unbelievers. Only Muslims enact Jihad. Any Muslim who takes up arms against the West engages in Jihad. No clumsy anxiety-ridden neologisms like "Islamists" or "Islamofascists" or "Islamic extremists", etc.

Crusader Zionist Kaffir Pig that I am, let me publish here as my small part one of the cartoons which Muslims find so offensive. My response to Jihad is to enact the First Amendment and tell the Muslims to get used to it. 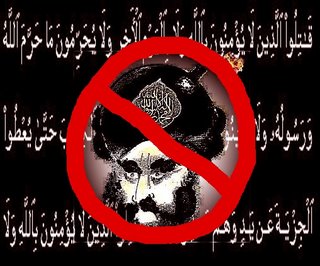 Text is Quran 9.29: "Fight those who do not believe in Allah, nor in the latter day, nor do they prohibit what Allah and His Apostle have prohibited, nor follow the religion of truth, out of those who have been given the Book, until they pay the tax in acknowledgment of superiority and they are in a state of subjection."