Every bit of info I learn about the cosmos, the planet, etc. makes me wonder. And it would be a mistake to underestimate the role that computer graphics play in all this, to say nothing of photographic technology.  These modalities make arcane bits of scientific inquire into almost revelatory images.

Although I am not a Young Earther or anything of the kind --even St Augustine in the 5th century thought the Genesis days were metaphors-- I find Darwin critics interesting, partly because I resent the arrogance of their orthodoxy. I am a creationist only in the sense that I am a theist, but not on scientific grounds, where my expertise is nil. Yet the Cambrian explosion and the required pre-existence of fantastically complex DNA for the emergence of the "simplest" living cell...I don't think that men of science have any idea of how to explain those things yet. Much less why the Big Bang banged or what was "before" it. Reality always outstrips any theory about it.

On the mundane and very post-lapsarian plane, I briefly looked at a UK spinoff of Jersey Shore, called Geordie Shore, about similarly simian young Brits in Newcastle. My God, I could only take about 30 seconds. What vile and subhuman behavior. As I have mentioned elsewhere, for a culture that foregrounds "human dignity" as one of its great virtues, our entertainment overflows with images of humans at our most pathetically contemptible, where dignity is farthest thing imaginable. Made me think that for people like that, Islam might be preferable. 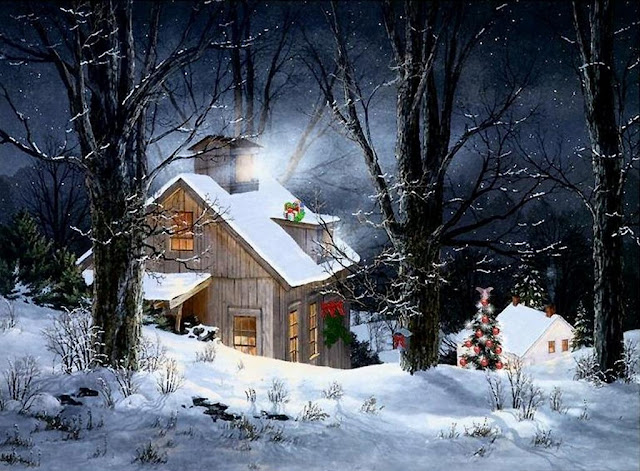 My admittedly sentimental wallpaper for Christmas, above,  echoes my admittedly sentimental attitude about Christmas. The painting evokes evening on a cold quiet New England hillside: the sea of stars in the black sky, the crunch of snow under your feet, the light and implied warmth glowing from the simple houses..this was how Christmas felt to me as a child...and well after that. Whenever I see the image I imagine myself coming home from school late, or heading back to the house after walking the dog. My siblings are playing in the living room, my Dad is reading the paper and my Mom is cooking dinner. It is clearly the fantasy of an introvert who is stimulated by contrasts: dark/light, warmth/cold, silence/sound, distance/intimacy, presence/absence.  If you could do the Twilight Zone thing and imagine yourself into a picture, this would be one I'd want to visit.

Mr B and I both grew up in stable and sane families. Whatever our ups and downs, home was always a safe place. It never occurred to me until I got to know the wider world and especially the years I worked with Black and Latino middle-schoolers that home could actually be the last place you'd want to go to feel safe.

Reminds me of one of the miscreants sent to me for counseling. He was Yemeni and Muslim, coming here with his widower Dad and sister to join a network of relatives, one of whom owned a store where he worked on weekends, underage. His 16-year-old sister did not go to school but stayed in the home. After yet another event in class where he was sent to me for misbehavior, he announced that the family was returning to Yemen because --and I am sure he was quoting his father -- "people here have too much freedom."

I wish all the Muslims felt that way.

I wish all of the Muslims would go back home too. Having some sense of accountability might mean that I would hate them less. When it comes to subjects about atheism and Theism, I do not side with the official Atheist Movement(TM) but I do tend to think like an atheist on scientific topics or any scientific approach to any topic. Protestants hate that about me. As Chris Bechtloff says:" Catholic? atheist? Same thing. "

Your memories and vision of the holidays are the same as mine with the exception of the fact that I am from Dixie and when it snows, it usually snows in January and February. The Christmas lights were always pretty and my family has a heavy Norman and Germanic taste so thee were always electric candles in all of the window sills.

Ex, the prevailing theory behind the Cambrian Explosion is that the sudden diversification of life was only an "apparent" diversification. The Cambrian Period was the first time animals had hard bodies, and it is extremely difficult for soft-bodied organisms to be preserved in rock (especially since the fossils have probably been long destroyed by geologic processes).

A, my family, too, does the electric candles in the window thing, and we too are largely of Germanic stock.

Apparently in China they have a famous excavation site discovered in the 90s that shows the layer right below the Cambrian and it has softbodied fossils. Funny how Darwinists used the Fossils of the Gaps argument to keep the theory in place. All orthodoxies eventually engage in similar behaviors.

I should have amended myself- there are indeed fossils from before the Cambrian. There are a few sites like that around the world- one in China, another in Australia, and I believe another one in Canada. It's just that the theory goes that either the bodies were not preserved, or the rocks they were preserved in got warped into metamorphic rock or melted into magma, and thus the fossils were destroyed. But yes, Darwinists still engage in the X of the Gaps. Like you say, orthodoxy is prevalent on all sides. I'm not sure anybody is capable of questioning every assumption they have.

What I always wondered was, who cares if there are no fossils at all? Don't there have to be very specific conditions for a fossil to be preserved? I would think that it would be entirely possible for an entire millennium, or an entire ten millenniums, to go without fossils being formed. More than that, what is to stop a fossil from being destroyed?

A, yeah, there need to be pretty specific conditions. A dead organism needs to be buried very quickly after death for the complete skeleton to be preserved. The sudden apparent loss of millennia from the rock record is a known phenomena in geology, and is usually thought to be the result of extreme erosion conditions. If fossil-bearing rocks are metamorphosed, meaning that the crystals of the rock are realigned or even have their chemical make-up altered, the fossil will also be affected or even lost; if the rock is melted, the fossil melts as well.