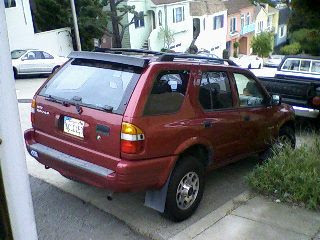 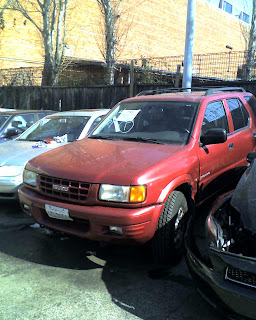 With the other car-casses
Finished up with the insurance company today and signed over my poor Isuzu Rodeo to them as total loss after some drunk ripped off the passenger side. Parking your car on the street in San Francisco is dangerous. This is my third SF car and every one of them has been crashed into while parked.

I liked this car a lot. I hope the drunk, who was arrested for DUI, gets the full book thrown at him. Major major major effing inconvenience for me.

UPDATE: BREAKING THE SILENCE AND SPEAKING TRUTH TO POWER

I have been reminded by Himself that the picture of my car in happy times was taken outside his house, where he often car-sat when I was out of town. He opined that he had taken better care of my car than I did and as a result of this loss, he was hurting, but that his pain was rendered invisible and his suffering marginalized by my grandstanding. By this he was, as he said, insulted, but not offended. (He also does card tricks.)

So let me state for the record here that I was not alone in my pain and that in fact this was probably more of a loss for him than for me. Sorry to have forgotten that this was really all about you, Signor.

A car is a hole into which you throw money.