My first trip to California, with my then-lover J, was at this time of year in 1988. We'd left the snowbanks of Toronto and arrived for our vacation in San Diego, where people wore shorts and there were flowers in the flowerboxes. I had lived my whole life with Northeastern winters, and 15 years with Toronto's long and mind-numbing grey freeze. It was only 2100 miles distance, but it felt like a different galaxy. I was in a trance. (Actually even thinking of it now brings tears to my eyes.)

Although he was no fan of long car drives (I am), he agreed to us driving up the coast from SD along Highway 1, the scenic route that hugs the land along the Pacific. I'd seen pictures and wanted to do it. I thought we could drive up to San Luis Obispo, stay overnight and then make the second leg to San Francisco.

However, I did not make reservations. And not only was it Valentine's and Presidents' Day weekend, it was also Homecoming at CalPoly in SLO. After driving for over seven hours --not J's idea of a good time--, we discovered that there was no room in the inn. And it was five pm.

So up the coast we headed, still on Highway 1, soon in the dark, stopping to look for lodging wherever we could. No room in the inn. Nowhere. And I was soon sitting next to 200 lbs of seething 6'2" triathlete. Ever try to drive Highway 1 in the dark...for the first time...no lights, curves, cliffs...with someone who hates car trips and is on the verge of hating you? At least we were on the inside lane, driving north, so there was less chance of us heading off into the nocturnal ocean.

We did not find a place until we reached an orange Howard Johnson motel in San Jose, another 200 miles, about midnight. It was not fun.

But the next morning we got up and drove the 50 miles into San Francisco. It was a bright and sunny Sunday morning and I got my first sight of the city and the bay from the Golden Gate Bridge. I'll never forget it. Over two decades later, the sight still moves me.

Moral of the story: Make reservations. Especially on this weekend.

Also on this weekend, on Valentine's Day morning two years ago, I woke up and realized, with a distinct feeling in my chest, that I was in deep with The Boyo (that's him below), that my "really liking this guy" had become something categorically more...that he had my heart. 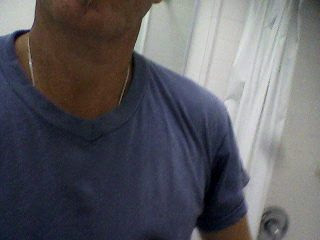 We're having Valentine's dinner on Sunday at a nice Italian restaurant in Sausalito.