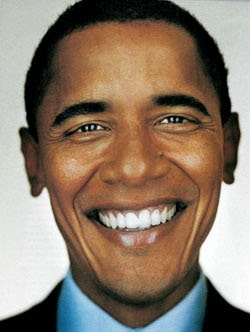 Irkel*, aka Barack Hussein Obama, is no longer wearing an American flag lapel pin because it no longer represents "true patriotism" post 9.11.

So I guess we shouldn't fly it anymore or salute it, etc?

And he wants to be President of...the United States of America?

Reminds me of the horrified reaction of the NY literati elite on September 12th (!!! )that wearing the flag was "mindless jingoism".

As Ann Coulter recently remarked, Irkel's major political accomplishment was to have been born half-black. Otherwise, as USMaleSF earlier pointed out, he's just Johnny BreckBoy Edwards with a smaller house and better teeth.

*(Rather than the standard "Urkel" I used the variant spelling found in the recently discovered medieval manuscripts in Tulsa...and it also contains the word "irk").
at 9:16 PM