Why I don't argue politics 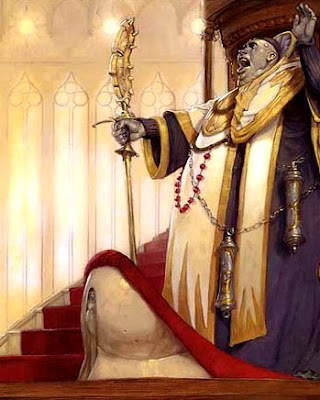 When I called my blog Ex Cathedra, I was well aware of what I was doing (see explanation at left sidebar) . I generally make pronouncements and hardly ever get into nitty-gritty factual argumentation. Neither does the Pope. He knows he's right, and so do I. ;-) Of course he writes a letter explaining why he's made the pronouncement, but it's a "here's why this is the truth" and that's the end of it. If theologians want to argue with him, they can knock themselves out, but not on his dime. You can like it or not, but it's his job and he's the boss. The infallible horse is already out of the basilica door. I don't argue politics because I don't argue religion. I have opinions, for sure, but I don't argue them.

A lot of bloggers argue in detail. Good for them. I like to read that stuff. I was a high school debater, but my taste for debate is actually pretty small. Confrontation is not a sport I take pleasure in. My political positions are about fundamental attitudes, rarely about the pros and cons of particular policies. That's not my forte and my sense is that people hardly ever move from one fundamental attitude to another anyway. I did, but that's not typical, lemme tell ya, especially considering the direction I've taken.

It's like a religious conversion. And politics carries with it, especially in our public culture, all the emotional force of religion. I know that mine do. And especially for many liberals, who have no religion, politics is indeed their religion and they act just like the religious types they eschew with such hauteur. (..."eschew with such hauteur"? Good Lord.) The oddity is that few of them believe in an Eschaton, but they try to immanentize it anyway. (Well, actually, if you believe in an Eschaton, you know enough not to try.)

And when was the last time a religious argument did anyone any good? I sometimes let my points of view be known to my friends, but I am not aware that I actively try to change their minds. Feels rude to me. I find that while I do not try to turn my liberal friends into righties, sometimes they can't help themselves and start to evangelize me...which is pretty useless, since I know their religion all too well. "Been there, done that" is a pretty hard nut to crack.

People convert to new religions all the time, but they are a distinct minority. And once a person's mind is made up about a fundamental attitude, how often do they really consider that they might be wrong? To be honest, hardly ever. I mean, you could argue with me forever against homosexuality and it really will just be chin-music to me. Might as well try to convince me that steak tastes bad. So by being pontifical, I am just being forthright. (See how I can turn intellectual sloth into a moral virtue? No dummy, I. ;-)

Again, I did. But it took a trauma like 9/11 to coalesce a decade of many niggling doubts and nonsequiturs into a full-blown walk across the aisle. As a friend of mine said, it's very disconcerting when you find that people you loathe are making a lot of sense. I still look around the room for someone else when I say, "I'm a conservative" out loud. Who, me? The homo?

So I just say what I think and move on. Besides, it's less work and more fun that way. And, with thanks to blogger.com for their free technology, it's my blog and I can do what I want with it.

Dear Ex-C
I know that all over the world kids are advised not to talk about politics, religion and sex while among polite company.

On your space, I'm pretty sure that the company is not so polite, but, really, I can't remember the last time I had an argument about religion that didn't end with us all holding hands and singing "We Are the World," a finish that always makes me feel like I've been sucker-punched.

Personally, since arguing about politics and religion goes nowhere fast, that only leaves us sex to talk about, and regarding sex, for me, actions speak louder than words.

If not sex, that leaves us with the weather. It's fine here, just for the record.

I feel much the same way.

When all is said and done, I'd rather take the pope's approach than pat myself on the back for being a master-debater. It's all a game, and very rarely do people really ever win these extended, link-littered fencing matches.

Sometimes if you just state your rationale outright and let everyone else sort themselves out, your message ends up being more effective because people don't get so caught up in the game (and winning) itself.