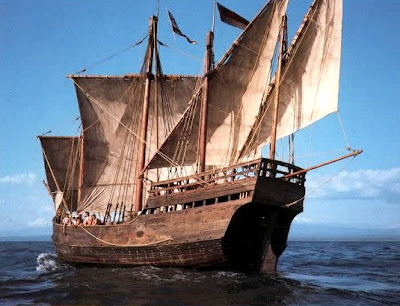 Columbus Day used to be a celebration of the founding of our civilization in the Western Hemisphere. Now it's shadowed by the suicidal narrative of pomo liberalism. Things like "Indigenous Peoples' Day", etc. and becomes an occasion for victimist resentment of "500 years of genocide" and what I call "White Lent"....the long cultural season of Caucasians repenting for their success, in this case over the earlier inhabitants of the continents.

It was customary to speak of the Europeans who came here as "settlers". Well, that's true. But it's only partly true. They were also invaders and conquerers, who often behaved just like every other groups of invaders and conquerers on the planet. But now, in these enlightened times, we know that invading and conquering is something that you should be sent to the principal's office for.

Well, if "they" hadn't done their regular human thing of invading and conquering, I would not be here. And since I am happy to be here, I am glad that they invaded and conquered. Willing the end, I must will the means.

But, you may ask, incredulous, surely you don't approve of everything they did?

But what about the Native Americans*? How do you think they feel today?

Don't know. You'd have to take a survey. It's not my concern.

But I do remember them on Columbus Day. They are a warning to me, and to us. Leaving aside things they could do nothing about --their defenselessness against European microbes, the massive technological superiority of the Europeans and their overwhelming numbers-- they did not, as a group, mount a successful defense of their land. They did not see the danger fast enough, did not change their traditional ways enough and so remained --like many of us now--in denial, divided, stuck in the past...until it was too late. In the end, they could not have held out, but they might have made a tougher enemy and slowed their destruction. They are what we will become in the face of Jihad and Reconquista unless enough of us wake up.

Despite the massive evidence of our species' history, our liberal schoolmarms now want us to act now as if conquest, submission and genocide are some kind of inexplicable deviation from the orderly course of peaceful civilized life beyond all that nasty tribalism and nationalism...when in fact they are the bread and butter of the human story.

I have been talking about the Europeans as "they". Just a habit, I guess, given my current feelings about them. But even if my genetic Irish and Scandinavian ancestors didn't get here til 1848 and after, who I am now, an American, makes the invaders and conquerers and settlers "us", not "they". They are my cultural and spiritual forebears. I am their son now.

And that's my point. If I were not to mark Columbus Day with gratitude, I would be saying, in effect, that I regret my own existence. And too too many of my countrymen (and women), infected with the virus of multicultural victimism, feel exactly that way. I don't. 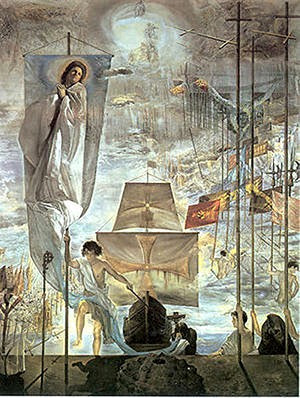 *BTW, they are not "Native Americans." America is the name given to this land by Europeans. The AmerIndians are the prior peoples residing here who were conquered by the Americans. "Native American" is more NewSpeak BS designed to get Whites to marginalize themselves. It would make as little sense to call the few Greeks remaining in Turkey as "Native Turks."
at 9:28 AM

EssEm - I just followed the link from GP - didn't know you had a blog! It looks good.

Please e-mail me on a private matter - I'm local to you ;-) ilovecapitalism -at- hotmail.com