What if they gave a wedding 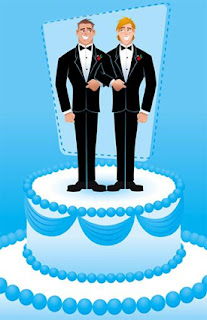 Or at least, hardly the numbers expected to answer the much-sought-after invitation.

Canada, as is well known, legalizes marriages between same-sex partners.

In Toronto, a city of several million, with a huge gay population, only
one same-sex marriage between Canadians has taken place in 2007.
The others were all foreigners.

In British Columbia, only a minority of these marriages were between Canadians. More female than male couples wed, in a population where gay men greatly outnumber lesbian women.

I certainly think that ways should be provided for same-sex couples to create legal partnerships, but I have never been convinced that re-defining the fundamental and already-stressed institution of marriage was the way to do it. And especially by judicial decision. For so few people.

If there were legions of gays --gay men especially-- chafing at the bit to march up to the altar, they seem to have had second thoughts. My guess is that they were never eager to hitch up in the first place.

You know Groucho Marx's old line about never wanting to join a club that would have him as a member. It seems that gays want to be accepted as members in clubs that they would never have joined.
at 3:37 PM