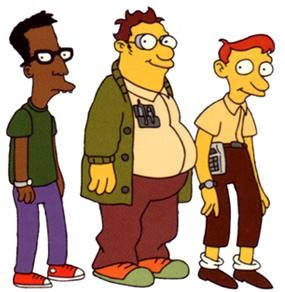 Hyperlinking is like free association. You find yourself in the oddest places.

Here, an article from 1999 by Steve Sailer on why nerds embody masculinity!

In terms of my newish triad on the masculine --power, courage and skill--- these guys seem to hyperspecialize in certain kinds of skills, ramping up the third part. Although they typically lack perceived power, especially physical and sexual power, or the standard kind of agonic courage, they can, by dint of extreme devotion to certains kinds of skills, accrue quite a lot of power, and their resoluteness in the face of mockery does show the courage of the intransigent.

Interesting take, too, on how a nerd can actually be more purely masculine than the Big Man.
at 8:24 AM