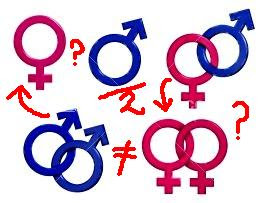 LGBT, and for the truly enlightened, LGBTIQ are not Klingon verbs.

They are acronyms meaning Lesbian, Gay, Bisexual, Transgender
and for the truly enlightened, so far, Intersex and Questioning.

This is the Yugoslavia of sex: forcing into an artificial unity a set of groups that may or may not have much in common. Despite the tensions between lesbians and gay men, at least they have this in common, the experience of being erotically drawn to their own sex. Bisexuals, well, really, hardly important. But the T thing, the transgenders...people who don't want to be their birth sex...what has that got to do with sexual orientation?

It's a political construct designed to enforce a political sense of group identity --lefty liberal and progrssive at all times, of course--and means nothing to me.
at 6:35 PM

I'm in Yugoslavia?? No wonder I've felt so lost on my journey. LOL

Thanks for stopping by. Feel free to drop in anytime. No need to call ahead.