Symbol for a Day 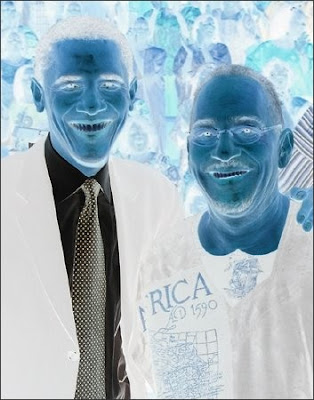 If Barry Hussein O wins the presidency next week, now that it looks like he actually is an American citizen after all, there will be a temporary celebration on grounds of his half-blackness. Acerbic rightwinger Roger Kimball --who looks exactly what liberals expect conservatives to look like, btw--points out The One's pre-inauguration appeal:

Above all, he was (at least in part) black. What better receptacle for the hopes and dreams of liberal, guilt-infatuated America? What prodigies of expiation might be accomplished were this young, charismatic, half-black apostle of egalitarian change elected President of the United States?

"What prodigies of expiation." I like that. Heh. Yeah, the Nanny in Chief will call us out of our selfishness and meanness and spread the wealth around, overcoming the limitations the benighted Founding Fathers put in their old and unliving Constitution, while also settling the oceans and making the Europeans and the Muslims love us again.

Mr Kimball points out that, if elected, Hype and Change will soon have to deal with reality and folks may not be so happy. You can bet on that.

But on the expiation thing, which is the real issue in this election. If The One wins, will it really mean that America has atoned for its racial sins?

Of course not! Silly wabbit!

Just think of all the people who did NOT vote for The One. Clearly there is a vast pool of unrepentant racism there, something that liberals and blacks can point to in order to continue the passion play narrative.

And when The One is criticized or blocked in office, will that not prove the enduring evil of Amerikkkan racism? Of course it will. Obama will become the First Victim, ever to be protected from the Eternal Racism of America. Thank you, Rev. Wright.

We've had "The First Black This and That" processing ad infinitum since Jackie Robinson over a half-century ago: mayors, governors, supreme court judges, generals, CEOs, Oscar winners, etc. etc. As the procession grows, however, the narrative becomes, counterintuitively, even more compelling and necessary, the more the evidence mounts that it is wrong. Facts do nothing to kill off the narrative of Black Victimization. Nothing will.

Well, why should it? What would blacks gain by giving it up? And how would liberals prove they were liberal without it?

Much of the black community in America is a mess, despite the unprecedently massive legal and societal changes in America about race in one generation. Seventy percent of black babies are now born out of wedlock, to be raised by single mothers. And the correlation between that scenario and a messed up life is very strong. Forty four percent of prisoners are black, and yet the black population is about twelve percent. Blacks do poorly in school, with high dropout and low graduation rates, even with affirmative action. Forty five percent of murder victims are black. And they are killed by other blacks more than ninety percent of the time. And too many of the lionized young black men who achieve breathtakingly fast and powerful fame, money and visibility through sports and thug music turn out badly. Etc.

If blacks gave up the Racist Victimization narrative --which even the Obamas, with their status and education and wealth and power, cling to-- what would explain the mess?

If it's not the fault of Whitey and his increasingly hard to find and therefore even more insidiously hidden, disguised and deepseated racism, what would explain it?

One of the hardest things to do in therapy is to get the patient to take actual responsibility for their own role in creating the situation that they complain about. No fun, believe me. I've been there. But it is very maturing and eventually liberating. Cause if you realize you can create a bad situation, you can also create a better one. It's called growing up.

But it's easier to be a victim and have someone else to blame. And Obama, if elected, will not put an end to it. On the contrary, since he believes it, along with his nasty wretched wife, it will continue to annoy the hell out of grown up people who have long since ceased to have any sympathy with it.

I've long been skeptical that having our First Black Prez could really be of so much significance...We've already had Oprah as our Queen for years already.