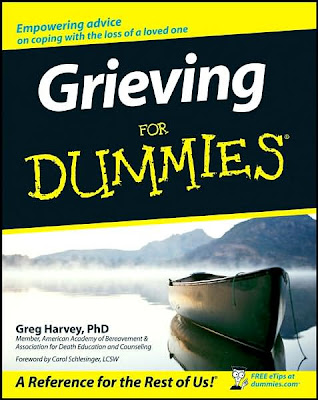 The stages of grief and mourning are now part of pop psych culture. There's even a book that gave this post its title.

Elisabeth Kubler-Ross famously discerned five stages in how people deal with loss: denial, anger, bargaining, depression and acceptance. "This can't be happening." "How could you do this to me?" "Maybe if I do this, then..." "I am so sad." "This is reality."

Of course, like most stage theories, it is too neat. It's a map, not the territory. My experience is that the five responses are real. But they are not linear. You don't go from a to b to c to d, leaving the prior stage behind. Grief is not a larva-pupa-butterfly kinda thing.

And if you are deep and sensitive, you can go through
more than one response at the same time,
sadness and anger both, for example.

But you mostly corkscrew around. And it is tiring and unpredictable. And duration is unpredictable. Trouble is, it's pretty mandatory when the loss has been real and significant, even though styles differ. Those who can short-cut through it are rare. And sometimes major unmourned losses come back to haunt us. As well, some people's griefs exceed the natural (which can itself, of course, be brutal) and become pathological.

The heart, the soul, the brain, even the body, have to digest loss.

The major benefit of this theory, as of many, is that it gives you a sense of normalcy at a time when you are likely to feel pretty crazy. The classic example is that it normalizes rage at a beloved person who has died, relieving the mourner of guilt.

I have a friend whose grieving style is unusual. After a major loss --the death of a beloved person or the death of a love-- there is three days of agony, which my friend describes as feeling like your skin is ripped off, over and over. But on the fourth day, a certain peace descends, and the original pain never returns. Sounds like a good deal to me.

The more usual is longer, less intense at every moment, but harder to shake. You can have moments of unhappy calm and then storms of rage or sadness that make your body itself feel damaged or attacked or sick.

And the best thing of all about grief --I am being ironic here-- is that the longer you live, the more of it you are likely to have. Especially in later life, more people die. And if you suffer, say, an emotional loss, even though you have the resilience of experience, you also know in your bones that you have way less time to make up for it.