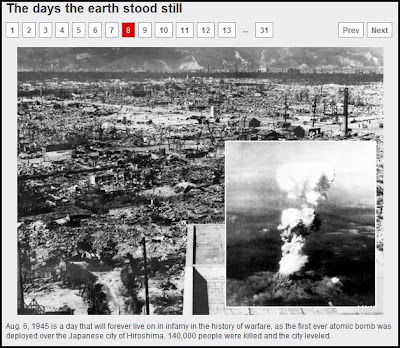 The New York Daily News online has a set of photos arranged around the theme of shocks to the American psyche. Kennedy's assassination, etc.

The photo of a bombed out Hiroshima carries this caption: "Aug. 6, 1945 is a day that will forever live on in infamy in the history of warfare, as the first ever atomic bomb was deployed over the Japanese city of Hiroshima. 140,000 people were killed and the city leveled."

It was Franklin Roosevelt who described the Japanese surprise attack on Pearl Harbor on December 7th, 1941 as a day that will live in infamy. Now, sixty years later, we have some clueless asshole hack at the News turning his phrase around to use against the United States.

Does this jerk have any notion of what kind of fighting took place in the Pacific? The first bomb was preceded by six months, six months, of intensive firebombing. And it took a second bomb to prod the Japanese into surrender, six days following. Any notion at all of what kind of fighters the Japanese were, even on outlying islands? And then to face them on their homeland?

Guess what the estimate of lost American lives would have been had we had to invade the Japanese homeland? The most common estimate was around half a million. Or try this.