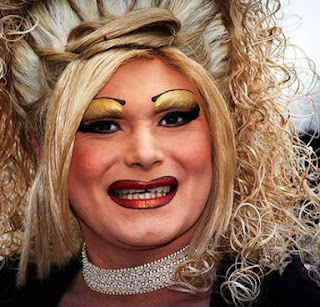 While wandering through the cyberlabyrinths, I came across a very creepy YouTube piece by some creature named Chris Crocker, acting out what I fear is a partly serious defense of She Who May Not Be Named On This Blog (And no, I don't mean Hillary Clinton). Another great candidate for "What's Wrong With America".

Much discussion ensues and some of it actually makes sense! (aka, I agree with it) . This kind of teenage ghetto-ghyrl behavior gets caught up in lots of defensive PC sentimentality. But what it is is the classical combo of narcissism, histrionics and sadism that constitutes the pathological Queen, an outcropping of the disturbed psyche all too common among gays. It's not a lifestyle, it's a character disorder.
at 9:18 AM