The Pope and the Precipice - NYTimes.com:

Since I parted ways with Catholicism, I have yet retained a great admiration for it for, among other things, being a bulwark of Western Civilization.

With each passing week, my admiration shrinks.

My dislike of Francis The Talking Pope is not new. As with my dislike of Barry Hussein O, it was quick of onset. Nothing either of them have turned out to be has made me reconsider my attitude. 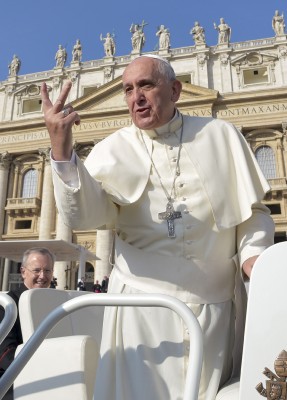 You have to look twice to see how many fingers he has up.


As far as immigration, crime, redistributing wealth and big government, the so-called 'Justice and Peace' issues, Catholicism is a loss. Indeed, an enemy to the West that it once helped build. Frank's recent equivalizing the death penalty and life imprisonment, though pathetic, is not surprising. The real impetus behind all these moves is that no one should be punished...(unless maybe they are a corrupt capitalist.) Retributive justice should be canned entirely, in favor of what nuns like, restorative justice.

But at least Rome is clear that men and women are not interchangeable and it stood, on paper at least, against the contraceptive mind that is part of what's emptying the world of Whites.

Now it seems that His Hipness wants to impress all the aging cool kids at the NYT and their younger clones at HuffPo by giving in entirely to the absolutely unquestionable dogmas of the White Liberals.
And we know how their kind reward the other Christian churches who have given in...they become the neutered chaplains of their contemptuous masters. After all, when your adversary gives in, what could he possible ever had to teach you?

The man is shockingly confusing. And confusing is the last thing a Bishop of Rome is supposed to be.

PS. A very kind, extremely circumspect and highly orthodox priest, an Anglican recently reconciled to Rome, points out that Francis is talking through his hat...without saying so, of course. That would be disrespectful.

The speech of Pope Francis which I began by quoting, with its initial cautions about closing oneself within the written word and the law, ended with quotations from Canon Law about the Pope's own supreme authority. But canons 749, 331, 332, 333, and 334, all of which he referenced, are, surely, the written word? And, moreover, are they not all written in ... um ... a law book?

A commentor, a layman unconstrained by the Reverend Father's ecclesiastical constraints, opines:


...I daresay the most charitable thing we can say of Pope Francis is he's a man of crude expression who nearly always fails to communicate properly.*..If one takes into consideration his ecclesiastical promotions, demotions, and assorted acts and allowances, I think it's far more likely he is confused and contradictory in his opinions, at minimum.