In solidarity with the cartoonists who have been attacked, physically and otherwise, for upsetting Muslim sensibilities by portrayals of the Muslim prophet, this image of Muhammad: 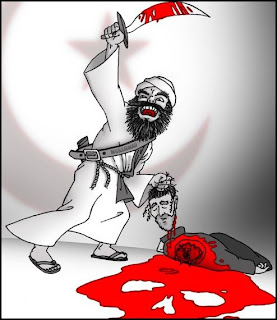 It evokes an incident in his life when he ordered the mass beheading of 800 Jewish men of the tribe Banu Qurayza for opposing him. He sold their wives and children into slavery. Details here.

Nick Berg having his head sliced off with a knife.

The point is not to insult him or his religion just for fun. I have better things to do. It is to make a deadly serious point --one for which people have been killed (see above)-- that Muslims, especially in Western countries with a history of criticism and tolerance of impolite public discourse, adapt rather than threaten. Just because their feelings are hurt...well, so what? Grow up. Or get the hell out.