The West vs Islam 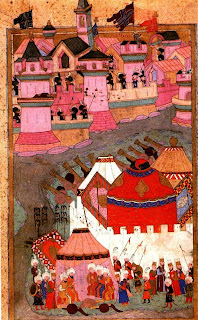 Roger Scruton essays on the seven factors where the West confronts Islam as other, and why we better know it and affirm it and keep it that way if we want to survive.

In the public sphere, we can resolve to protect the good things that we have inherited. That means making no concessions to those who wish us to exchange citizenship for subjection, nationality for religious conformity, secular law for shari’ah, the Judeo-Christian inheritance for Islam, irony for solemnity, self-criticism for dogmatism, representation for submission, and cheerful drinking for censorious abstinence. We should treat with scorn all those who demand these changes and invite them to live where their preferred form of political order is already installed. And we must respond to their violence with whatever force is required to contain it.

Of these seven, the one that provokes my attention is nationality, the capacity of a group of people to think of themselves and to act together as "we", which of necessity creates "they".

Multicultural ideology combined with massive immigration, especially from places which are historically inimical and/or culturally alien, weaken this capacity for nationality. Once you define your nationality as multiculturally diverse, you are undoing it. It is precisely the prior and transcendant claims of the nation which allows (inescapeable) diversity to be contained rather than to corrode.

The United States is not so named for nothing. Anything called "united" is so called not because it is naturally unified, but because it is engaged in overcoming division. This is built into our national history, the 13 fractious and independent colonies trying to act in concert without losing their ferociously held local identities. That tension has continued through out the Western expansion to the Pacific, to say nothing of the war between the states.

People who call for things like official English or the pledge of allegiance or loyalty to their homeland, etc. are cast now by the elites as "nativists" or "jingoists" or "xenophobes" because these elites have no stake in anything so crass as nationality. They have sworn allegiance to a higher group, their own trans-national class, epitomized in Davos Man.

My second country, Canada, was constructed not on a self-created revolutionary process among 13 centers of power, but as the forcible containment of two inimical groups, English and French, one dominating the other until the other found modern liberal means to hold the previously dominant group hostage to its victim status. Canadian nationality since Trudeau has degenerated into a series of highminded nostrums centering on socialized healthcare, pacifism, anti-Americanism and secularized multiculturalism.

In a country where immigrant groups are coddled and encouraged to resist becoming part of the previously existing nation, aka assimilate, the nation becomes a paper fiction incapable of responding as "we". When the huge group of Catholics came from Europe after the middle of the 19th century, native Americans, ie the Protestant majority, was understandably tense. But the agenda of the Catholics, which holding to their own religion, was to prove to the Protestants that they, too, could become good Americans. They did not arrive with the kind of chip on their shoulders which multiculturalism and the leftist narrative encourages.

After 9.11, the huge outpouring of anti-Muslim violence in America was...non-existent. And did the Muslims come out in the streets to parade their patriotism, to assure the rest of us, the native population --now Christian and Jewish-- that they, too, wanted to be good Americans? No. They played the victim and took every opportunity to scold us with the possibility that we might be bigots.*

Reminds me of a terrible and btw self-invited house guest I once had, who slept in my home, ate my food, opportuned my friends and then proceeded to criticize the whole experience....to my face...without the slightest hint of irony.

How can we face China boldly if we are anxious not to inconvenience, upset or confuse our Chinese-American citizens? How can we invade Iraq if our Iraqi-American communities are divided over that? We privilege the alien culture of the immigrants' motherlands over our own common identity and hobble and balkanize ourselves.

And we know what happens in the Balkans**.

*In Buffalo, Muzamil Hassan, founder of Bridges TV, which seeks to portray a pro-Muslim vision for Americans, has just beheaded his wife after she got a restraining order against his domestic violence. His reason for setting up the media network after 9.11: “American Muslims saw their entire faith hijacked as the perpetrators of these murders claimed Islam as their religion,” the fledgling company said. “The Muslim victims were not only the 358 innocent souls that perished that day, but the entire 7 million American Muslims.” See? Who are the victims of 9.11? Muslims.