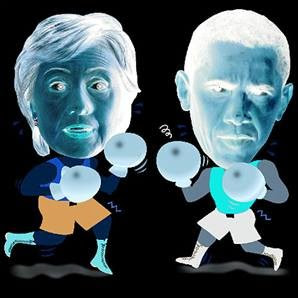 My antipathy to Hillary Clinton is surpassed by my anxiety about Barack Hussein. She, at least, is a pragmatic kind of ideologue. She loves and understands power and everyone knows that her persona is just that.

My fear about him is that he believes his own hype. He's basically a charismatic cipher for the same ol, same ol, being marketed as a biracial youth messiah and selling those finely crafted policy positions called "hope" and "change", with a huge dollop of faux racial redemption*.

This is what's behind the Wizard. At least with Hillary, the Nanny State would be run by a proper nanny.

Where's Churchill when you need him?

*I have an American friend of African descent who does not want Obama elected, for a quite specific reason. He asked me to imagine what the state of things would be if the man were to become President and then be assassinated, presumably by a Caucasian. The setback would be incalculable.
at 10:17 AM

Good writing here ..what turned you from Liberal to Conservative?

thanks, joe.
maybe more info on that than you wanted to know here:
http://usmale.blogspot.com/