A commentor on Facebook opines on Barry Hussein O's SOTU: (emphasis mine).

OK, this is what frightened me before he got elected. He's so scary good at oration. He could easily be a demogogue. So far he seems to be benign. He was so gentle on the opposition tonite. He's so talented. Guess we have to trust him. He's given no evidence that we shouldn't. He just so scary smart.

PS a day later. The guy who made this comment is white, probably in his 40s-50s, college educated and has a private advertizing business. I guess he epitomizes one of the differences for me between progressive liberals and conservatives or libertarians...I simply cannot imagine someone on the right talking like this about a President. The One. It is the adolescent-female bedazzlement that people like Chris Matthews express, he of the Obama tingle up his leg, who recently forgot for an hour that "post-racial" Obama is black. This kind of reaction to a politician....from grown men. It's not that cons never wax enthusiastic about a leader --Reagan, for example-- but the idea of just having to trust him because he's "so scary smart"....The whole tone...It creeps me out. 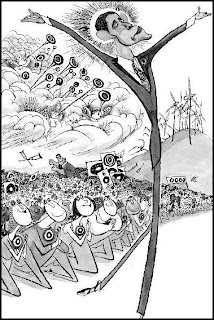