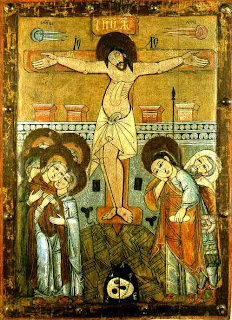 Some of the most telling elements of Christianity come not only from its great and fundamental doctrines but from its folklore and legend.

In this Slovak image of the crucifixion, there is a skull at the bottom. It is a frequent theme in extra-canonical texts that the hill of Calvary where Jesus was crucified is identical with the ancient hill where Adam was buried. In the image here, the blood of the Second Adam, Christ, drops down onto the skull of the First Adam and brings him to life again.

In the great dogmatic narrative, on Easter the divine Father brings his dead Son to life; and in this minor and popular narrative, the Son, in dying, brings life to his long-dead human Father.

Wasn't Jesus crucified on Golgotha? Golgolet means skull in Hebrew,so that Slovak image is based on more than simple local folklore.

Have a very good and meaningful Easter.
I'm already counting the days to when I can eat bread again.

I didn't mean that the presence of the skull in the pic was due wholly to the Adam story, but that the identity of the skull as Adam's was the beautiful legend.

Thanks for your Easter greeting, Leah.
And Gut Pesach.