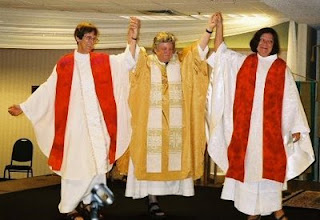 I spoke with a Catholic priest last month, a man who came of age when the Vatican Council and Pope John XXIII coincided with the dawn of the Sixties and the Age of Aquarius. Like so many of his generation, he lived by a dream of how his Church could be one day. It has been clear to me for a long time that that dream was an illusion. Amazingly, he was clear that he understood that, too. He can see what has happened to the Episcopal Church. He still thinks it would have been a good idea, but he knows it's gone, and mourns it, honestly.

Since the attempted ordination of the Danube Seven --God, what a quaint echo of the long-gone Sixties--- a coven of flower-power feminists have decided to become...Roman Catholic Womenpriests. In spite of the clear papal decision by Rome...and it is the Church of Rome, after all, no?...that females cannot be ordained, these girls have taken that tiresome "prophetic resistance" stand and had themselves "ordained". Now they have their own WomenBishops, too.

Risible. Not quite as ridiculous as the "inhibited" --not even excommunicated---Episcopal priestette, a teacher at a Jesuit seminary (!), who announced she was also a practicing Muslim. But, good Lord, ladies, where's your sense of reality?

It is very clear that part and parcel of this little phenomenon is a deeply feminist ideology which does not want to become part of the Church as it is, but to overhaul it into an improved mode where it would be unrecognizable. They accuse the Pope and the Bishops of "imposing their view" on the Church. What the hell else is a Pope or Bishop for but to impose their view on the Church. That's their job.

The likelihood of the Roman Church welcoming this horse full of Trojanessesjand its "new model of priesthood" into its evil patriarchal abusive bosom so it can be mentored and enlightened and raised up to the level of its highly evolved daughters?

Womenpriests? They've even made a new word for it. Roman Catholic Womenpriest. It's like Sunni Muslim JewImam.

I think you're on to something important when you write about how much you can change a thing before it is not that thing any more.

The standard for judging the difference between a bend in the road and a turning of a corner is not uniform. You judge the ordination of women into the Roman Catholic Church to be a turning of the corner, but being a gay man and a Catholic to be a bend in the road. I'm not asking you to be 'fair,' just saying that the way you distinguish between the bends and the corners may questionable by others. And I favor that questioning, much more so than the perspective that we're all brothers and sisters who share the same struggle and must support each other's causes.

When the Church of Jesus Christ Later Day Saints (Mormons) changed their laws and allowed the ordination of Black men, would you say that was a bend or a corner?

I favor organizations with voluntary membership being able to have any standard they desire for membership and role, and the ability of members to leave that organization and found a new one if those limitations are too restricting. I have my own ideas of bends and corners and they have changed over time. I know it when I see it, pretty much. My opinion has nearly no influence in the real world.

PS: Aren't you relieved that I haven't mentioned that Karl Popper also wrote about how much you can change a thing before it is not that thing any more?

Well, Trevor, your PS is an example of one of my favorite rhetorical devices: paralepsis.
Very funny.

Being gay and Catholic. Well, I will always be "Catholic" at practically a DNA level, and culturally and in terms of its influence on me. But I gave up practicing and identifying myself as Catholic precisely because I had such a problem with the teaching on homosexuality. What I might say to these girls is, "I disagreed and left over it. Why don't you have some respect for yourself and the Church by doing the same?"

But even if I did say I was Catholic and gay, --which I did for several years, in good faith---I could just be considered a "bad" Catholic. Sin and schism are different orders of behavior in Catholicism. Being gay and Catholic is not a matter for excommunication, just confession. Everybody sins. But asserting that you have possession of Holy Orders, a public act that lies at the heart of the Church's existence, is a kind of defiance that is, I would assert, in a quite different category. Going to communion as an active and unrepentant homosexual is committing a sin, like going to communion after having sex outside of marriage, but publicly getting "ordained" invalidly and against the clear prohibition of the legitimate authority and then carrying out sacraments in public is sort of like the ecclesiastical version of sedition.

Others would disagree. But being the arrogant SOB that I am, I am unimpressed. Disagreement is near universal on near everything in life. It just means a lot of people are wrong! :)