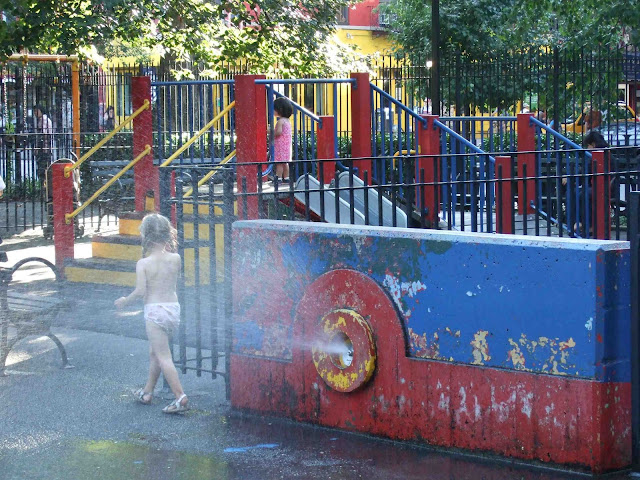 While on an errand for my ex, T, I walked through Tompkins Square Park on Manhattan's Lower East Side on Tuesday morning. Back in the 70's and 80's, it was a hell hole, full of drug addicts, homeless people and filth. As part of the whole regeneration of "Alphabet City", it is now reborn, as it looked in the 50's: kids playing baseball, old men sitting on benches under shady trees, talking politics and their wives, and in the north playground on this hot muggy day, the fountains were opened up as sprinklers for scores of toddlers and their moms and nannies to cool off. Well worth battling through the resistance of the Usual Suspects ("Gentrification is Genocide Against The Poor") back in '88. Very nice, clean, safe and cool. A pleasure to see.
I thought it would make a nice photo, those kids romping in the water...and then I realized that in this day and age, a tall white man in sunglasses taking pictures of half-naked children...I might have a visit from a cop. So I kept on walking*. Sad, that.

But the left will use them as pawns in all of their political - genderbending schemes and nary a peep about how inappropriate that is.