One of the things I like in a man is how different he is  from how he appears to be. My buddy Deke, a big scary former Marine, loves classical music and novels. My friend Bill, the quiet older bodybuilder behind the gym desk, reads Aeschylus and Montaigne. My former almost boyfriend B could be any number of guys cracking jokes while shopping in the plumbing aisle at Home Depot and yet is one of the most sensually magical men I have ever met. 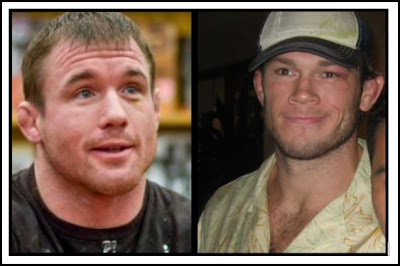 On the left, Matt Hughes. On the right, Forrest Griffin. Below, these fellas in their natural habitat, championship fighters in Mixed Martial Arts...

Very nice! I love both of those men warriors. They have great character strength too!