I'm the type of guy who likes typology. I like to use overarching maps of all kinds of things, including people. My favorites are the Jungian-based Meyers-Briggs and the strangely useful Enneagram. It's a kind of shorthand that outlines how a person is likely to perceive the world and themselves, to act and make judgements, etc. I find it useful especially where there are conflicts between people which can be traced to typological styles. It can defuse things if people get the idea that the differences are not aimed at each other but flow from a set of character structures that are almost innate.

The Boyo recently took a Meyer-Briggs test and discovered what I already knew, that he is an ESTJ. He is extraverted, interested in the world and people outside himself. He is sensate, focussed on concrete physical objects and situations in some detail. He is a thinker, preferring to use rationality to assess situations and evaluate them. He is a judger (a peculiar term in MB parlance) who prefers order and predicability. Guardian or Enforcer is a title that fits this type. Empath, for example, does not.

There are sixteen combos of these four items and plenty of descriptions of how each type typically (!) perceives, judges, behaves, etc. How folks act in relationships, at work, etc are included.

I am an INTP, opposite to The Boyo on three out of four items. This stuff is not exact science, so you can find MB websites tell you that the relational pairing an INTP and and ESTJ is both a disaster and that it is a good balance. The fact that we are both T's is a big help. And the other differences are, to me, mostly a source of interest, at least at this stage.

As an introvert, my internal world is more powerful for me than the outside. As an intuitive, I am more concerned with the possibilities of a situation than its concrete details. As a thinker, I, too prefer to use rationality to assess situations and evalute them. As a perceiver (again, this odd MB way of talking) I prefer to let things unfold without a plan. I'm an Architect or Investigator. 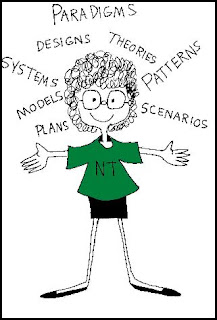 I use the typologies to alert me to differences that I might naturally have problems with; the type discourse allows me to see it as simply a normal alternative with its own pros and cons.

Mr. ESTJ, for example, recently did something typical of his type and I sent him the following email note (in a form and manner typical of my type):

This was the reply I received:

Can you explain how these qualify as weaknesses?
Thank you.

In the end, ya gotta laugh! And we do. A lot. It's pretty typical of us types.