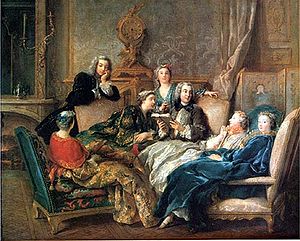 It has been puzzling to me to see the role that fabulously wealthy Westerners play in the dissolution of the West via progressive politics. Ted Turner and George Soros come to mind right away, along with all the rich of Hollywood. Why do these people, who have so benefited from Western capitalism and freedom, take such a contemptuous attitude toward it? They are far more likely to have an open ear for and use their influence to support people like Fidel Castro and Hugo Chavez and movements like Hamas and the whole panoply of murderous Muslim jihadis than they are to even have a civil dialogue with their own countrymen on the right.

As well, several very powerful rulers of the time --Catherine of Russia, Franz Josef of Austria, to name two-- combined an affection for the liberationist and anti-traditional writings of the philosophes with a completely traditional and monarchical devotion to their own power. "Enlightened despots" is what they are called. Mouthing the slogans of freedom, they did what tyrants always do, amassed power and wealth.

So maybe our current cultural and political masters, including the superrich, do have a historical precedent.