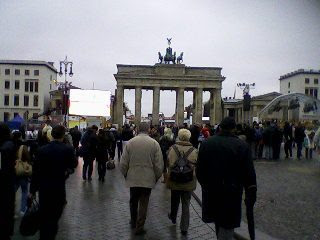 My Guy is in Berlin and sent this shot of the Brandenberg Gate. Twenty years ago there would have been a wall there, that symbol of the split between the Communist World and the Free World, aka The West. It marked the divide between West Berlin and the world of the German Democratic Republic, where hundreds of thousands of informants helped the Secret Police, the Stasi, keep tabs, and worse, on fully one-third of the population. All in the name of the greater good.

No human arrangement is without flaw. My Irish grandmother put it this way, "All human things, given time, go badly." Hibernian optimism at its best! Certainly no political or economic system lacks problems. But some, for all their flaws, allow for kinds of human flourishing that others do not.

The West, restless child of Athens and Jerusalem, of Christendom and Enlightenment, has dominated the planet for the last five centuries. Much of the result has been extraordinary improvement in life for many. Have there been costs? Of course. But this is unavoidable on Planet Earth. We are not an episode of Star Trek.

One of the most unfortunate, lamentable and frankly evil developments within the West --one which is both utterly Western and implacably anti-Western-- is Marxism. I have opined elsewhere that Marxism is a far greater evil than Nazism, the convenient whipping boy of so many of our highminded betters. Marx and his children and nephews and nieces continue, despite the failure of the Communist project, to bedevil the West. His ghost is active and the backwash of the dismantled Second World still infects the air.

I have mentioned my idea of the Seven Pillars of "progressive" or "liberal" ideology: multiculturalism, feminism, redistributionism, environmentalism, pacifism, secularism and transnationalism. They all stink of the Gramscian mode of Marx's vile enterprise: for the sake of ideal human equality, to make all humans equally miserable in practice.

The obsession with equality, to the exclusion of almost every other value, marks the political and social landscape of the West two decades after that Wall in Berlin came down. Masquerading as a grand vision of hope and change, justice and peace, it is an ideology born of envy and hatred and leads eventually, as Communism always did and does, to Orwellian tyranny, poverty and soulessness.

PS. Synchronicity? Just arrived home about an hour after posting and turned on the TV to find a story originating from...the Brandenburg Gate, about a Volkswagen called the Phaeton.

PPS. An email from Himself later in the day. Attending the celebration at the Gate, found himself moved by the place, symbolizing, as he sorta put it, the loss of possibility and the refinding of it. I like him.