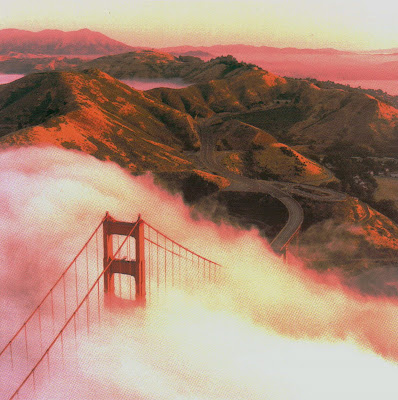 A few years ago I spent Christmas with friends in Ukiah, which is not in Sonoma county, but in Mendocino county. Driving back south to San Francisco (about 100 miles) , I stopped for gas and was accosted by a man who asked me to buy him a gallon of gas. I declined. I had never been approached in that way before, and, I'm from NY, so I always assume that strangers who ask me for anything other than the time or directions are scam artists.

As I pulled out of the gas station, I glanced back and saw that he was an Indian man (American Indian) with a wife and small child in a truck all filled with household items, furniture, etc.

So, of course I thought, "There was St. Joseph with Mary and the Christ Child and he asked me for help and I turned him down. Great." I was listening to Handel's Messiah as I drove down Highway 101, alternately moved by guilt over my hypocrisy and by the Christo-Yahwist bombast of the great story and its music.

When I crossed the Golden Gate Bridge and pulled up to the toll station to pay my $4, the agent said, "I'm sorry, I can' t take your money." I was too stunned to say anything, imagining that she knew my awful secret, and just stared at her for a second with my outstretched hand full of bills. "The people in the car ahead of you paid it for you. Merry Christmas."

Guilt squared. First, I had turned down St. Joseph's request for help and now some anonymous stranger had done unworthy me, for Christmas, a "random act of kindness."

I spent the next week tracking down homeless people and giving them money.

Today I was on my way back into the City from Oakland and when I got to the Bay Bridge toll booth, again, the agent said, "The man ahead of you paid your toll, sir."

It's not Christmas. It's July 31st. The feast of St Ignatius Loyola, founder of the Jesuits. Hardly a festival day. But here again, for no reason, a stranger had paid my toll.

And again, surprised, I pulled away. Of course, the "right" thing to do would have been to pay the toll for the person behind me, but I was too taken aback. (And, to be honest, I am not generous with money and strangers.)

Sigh. So now I'll have to bother homeless people all week.