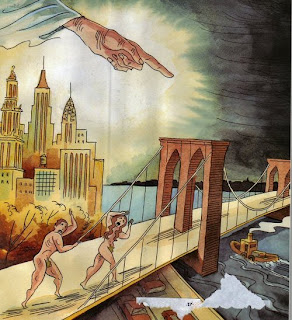 (The Expulsion of Adam and Eve...from Mahattan into Brooklyn?)

English Dominican theologian Aidan Nichols writes in his book Epiphany (the emphases are mine, however)

To a secular mind, the difficulty with this doctrine (of original sin) will be not only the concept of vicariousness but also the question of historicity. The story of the Fall could be read as a symbolic account of human rebelliousness against God, of how all our cultural developments (as for the Genesis writer, clothing, metal-working, city-building) are spoilt by an element of vengefulness and pride. Yet sin must have entered human life at some historical moment, whether identifiable or not. For unless evil marred the creation of humanity contingently (i.e., historically), it could only have done so essentially (i.e., by God's own creative act), which is unthinkable.

Well, watch me think it.

It is the notion that “sin must have entered human life at some historical moment” which I find, well, unintelligible. And if man is not of a contingently fallen nature, then the Catholic myth cannot hold. For man to be essentially fallen is in fact thinkable, if the creator God is demiurgic.

What the original sin doctrine requires me to believe is that the human species was once without its “sinful” elements and yet was human. The doctrine of Christ’s sinlessness is meant to show that it is possible to be human and sinless (likewise with the Virgin and her Immaculate Conception).

First of all, a sinless humanity is another species. The empirical human, the species homo sapiens, evolving as it has from the primates, combines all the instinctual primate base with consciousness. And if we were so created, then the creator is responsible for us. We are not without responsibility, far from it, --that is part of our paradox-- but God is not innocent. Hence, demiurgic.

In the Dec 31 04 Wall Street Journal, Orthodox theologian David Hart opines: “The Christian understanding of evil has always been more radical and fantastic than that of any theodicist; for it denies from the outset that suffering, death and evil have any ultimate meaning at all. Perhaps no doctrine is more insufferably fabulous to non-Christians than the claim that we exist in the long melancholy aftermath of a primordial catastrophe, that this is a broken and wounded world, that cosmic time is the shadow of true time, and that the universe languishes in bondage to "powers" and "principalities"--spiritual and terrestrial--alien to God. In the Gospel of John, especially, the incarnate God enters a world at once his own and yet hostile to him--"He was in the world, and the world was made by him, and the world knew him not"--and his appearance within "this cosmos" is both an act of judgment and a rescue of the beauties of creation from the torments of fallen nature.

Whatever one makes of this story, it is no bland cosmic optimism. Yes, at the heart of the gospel is an ineradicable triumphalism, a conviction that the victory over evil and death has been won; but it is also a victory yet to come. As Paul says, all creation groans in anguished anticipation of the day when God's glory will transfigure all things. For now, we live amid a strife of darkness and light.”

Shows the place where orthodoxy and Gnosticism almost touch.

I’m having a small issue I can’t get my reader to pickup your rss feed, I’m using google reader by the way.

This is valuable information , thanks I will try it out! scholarships forwomen